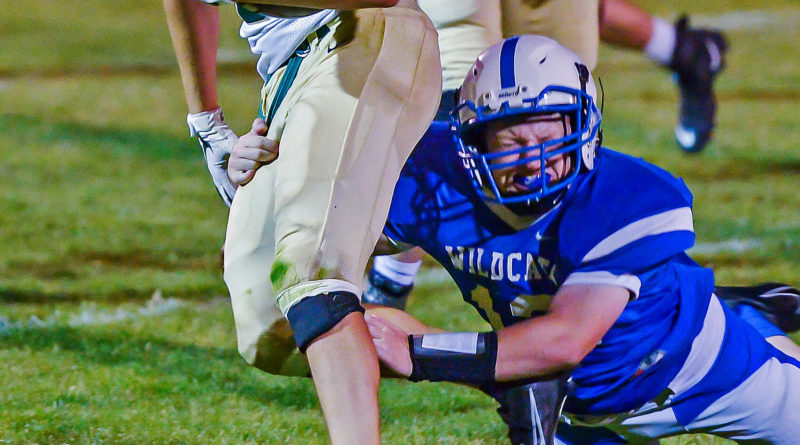 High school football has been postponed to spring 2021 in Washington, but six students are getting ready to start their season — in Idaho.

Colton High School’s football program was approved to combine with Genesee High School in Idaho due to not having enough players to field a team. The result? Six Washington high school football players are on track to compete in Idaho’s football season, and fall camp is already underway.

Colton athletic director Jim Moehrle saw the trend coming several years ago and said the school barely fielded a team in 2019. Plans to co-op with Genesee were set into place well before the COVID-19 outbreak.

“It’s definitely kind of unique right now,” Moehrle said. “We started this forever ago, it seems like. I’ve been working on this for two years knowing it might happen.”

The news marks the first time in school history Colton, a four-time state championship program, does not have the numbers to field a team on its own, administrators believe.

Colton was once a small school football power that won three consecutive 2B state titles from 1975-1977 — the first two under head coach Mick Dennehy, the third under Bob Bates — and four total after winning again in 1983. After dropping to 1B, Colton returned to the state finals and finished runners-up in 1990 and 1997.

Jerry Morse is a retired teacher and principal who worked for the school from 1972 to 2004. The graduating class of seniors was 60 in 1973, his first year, with a four-year enrollment of around 160 kids. It dwindled down to 11 seniors in 2020, as sometimes happens in small farming communities with ebbing populations. Several of Colton’s league opponents in Washington co-op for football.

Genesee, which went 1-8 last year and 0-6 in the 1A Division I Whitepine League, will field an 8-man football team in the fall. Genesee is set to open its season on Aug. 28 when it hosts Timberline (Weippe) in front of fans.

Jaxon Moehrle said the transition has been smooth due to the fact that the two farming communities are so close already. Genesee and Colton, both of which straddle the Idaho border, are roughly 11 miles apart.

“It’s definitely is a little different not have anyone else (in Washington) doing this,” Jaxon Moehrle said. “I just hope to have a lot of fun, make playoffs and see where we go from there. We have a really good team this year.”

Angus Jordan will step in and play quarterback, freeing up two of Genesee’s better athletes — Dawson Durham and Cy Wareham — to move out wide and make plays.

“First day of actual practice it was like they’d been a team for years,” Schnebly said. “It’s much easier as a coach when you can dive straight in and not deal with the segregation of Colton and Genesee players. It’s made my life very easy. … it’s been pretty much all about the team.”

It hasn’t been lost on Schnebly that his head coaching debut will be a piece of history — one of the first high school football games to take place in the Pacific Northwest during the coronavirus pandemic.

“Not a daunting thought at all,” Schnebly joked. “There have been minimal hiccups given the circumstances.”