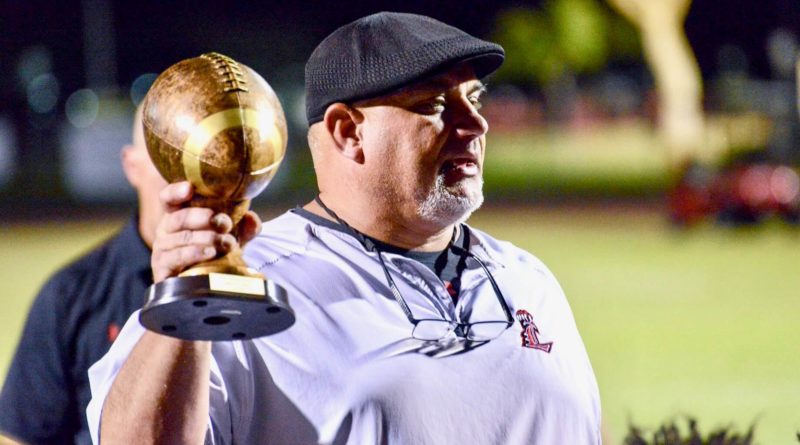 Add one to that total for the upcoming season.

Mark Smith, who capped an impressive 20-year high school coaching career in Arizona by leading Liberty of Peoria to the Class 6A state title last December, is returning as the new coach at his alma mater – Shelton High School.

Smith was on the last Highclimbers squad to win a state playoff game. That came in 1985 when they won the Class 3A title, defeating Lake Stevens in the Kingbowl finale in Seattle.

Shelton has not been to the state playoffs since 1991.

Smith has a captivating back story in coaching: After he graduated from Seattle Pacific University, he was hired as the defensive coordinator at Meadowdale High School in 1990-91.

At 23, Smith became the youngest head football coach in the state when Onalaska High School hired him in 1993.

A year later, he came back north to become the baseball coach and assistant football coach at Sammamish High School.

In 1995, Smith was set to join Keith Gilbertson’s staff as a graduate assistant at Cal. But weeks before he was supposed to leave, Gilbertson was fired.

Instead, Smith headed east for an assistant-coaching position at Bemidji State, an NCAA Division II football program in Minnesota. He stayed there until 1997 when he left for another high school position, becoming the football coach and athletic director at Brown Deer High School in Wisconsin.

Smith finally settled in one state – Arizona – starting in 2000, and coached at three other high schools (Glendale, Millennium, Moon Valley) before landing at the newest school in Peoria – Liberty – as the defensive coordinator in 2012.

The Lions went to the 6A title game in 2014, but lost. Months later, Smith took the reins of the program.

He went 42-19 in five seasons at Liberty. And last fall, after the Lions caught fire after a slow start by rolling through the 6A playoffs, including a 34-28 overtime triumph over top-seeded Red Mountain in the championship game at Sun Devil Stadium.

Life was good while in Arizona: He’d travel home to spend time in the summers in Washington, and his parents would come down during the fall and winter to watch football.

But when former Shelton coach Mike Speaks called him days after Liberty won the state title, and told him he was likely going to step down after two seasons, it got Smith thinking.

And the one thing he did not like about Arizona’s unbearably hot summers became a glaring problem.

“I did not like the way my kids were stuck inside,” Smith said. “I am a hands-on guy. I love hunting and fishing.”

On March 9, he accepted the job at Shelton. – just days after Liberty held its championship ring ceremony.

“Everything happened weird,” Smith said. “I walked into the weight room during a football class and said, ‘Listen guys, I want you to know I resigned to accept a job at my alma mater.’

“That is all I explained to them (in person). It was a shock.”

But Smith, 52, is looking forward to starting a new challenge – in his familiar home state. And starting this year, Shelton will be in the 2A ranks, playing the likes of defending state champion Tumwater, W.F. West and Black Hills.

“I am excited to come back to a one-horse town,” he said. “It is a great opportunity to be around family, be at my alma mater and be around people who make life a comfortable experience.”