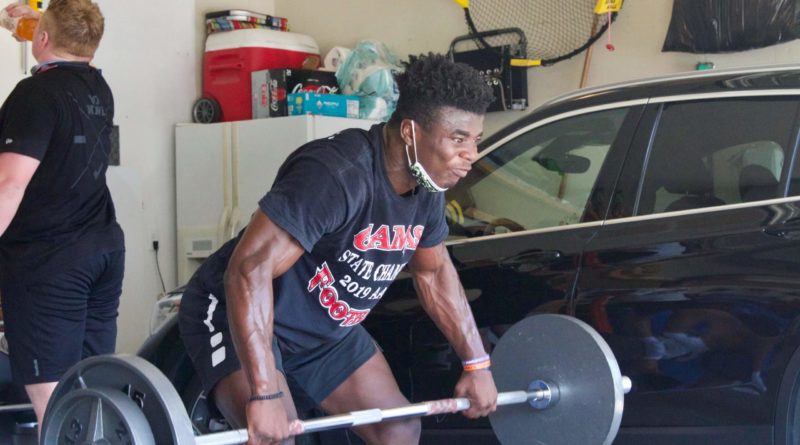 CAMAS — The music blaring out of Jake Blair’s garage drowned out the sound of clanking weights and energetic football players on a recent scorching afternoon in Camas.

Lineman Robert Silva chirped words of encouragement to a teammate getting up his last reps on a bench press and tailback Jacques Badolato-Birdsell danced in between workout stations, giving off the guise of normal in a year that is everything but.

Blair and his fellow Camas football senior captains expected to be weeks away from the start of the high school football season, which for the Papermakers would have been their first game as defending 4A state champions.

If the season was to start now, on time, they say they’d be in shape and ready to play. But after months of doubt that a season would be possible due to the COVID-19 pandemic, which led to it being postponed to a mid-February start, Blair decided to control what he can control: his leadership, chemistry with teammates and his fitness.

With school weight rooms closed, he’s one of many high school football players in his position across the state leading his teammates, his peers, through an offseason that’s been extended at least six months. He hosts workouts in his parents’ garage with his fellow linemen three times a week and defensive backs and running backs 2-3 times a week. Most of them wear face masks and cycle through in small groups comparable to the “pods” that will be commonplace in high school football if the sport returns in the COVID era.

“We just kind of started this two months ago, and just kind of been grinding ever since and just preparing for our season to start,” Blair said.

Camas’ run to the state title last December was in large part thanks to its staggeringly huge, grizzled offensive line headlined by four all-state selections. Several of them went on to play in college, such as Rush Reimer, (Montana State), Tristan Souza (Washington State) and Caadyn Stephen (USC), though Stephen missed most of the season nursing a back injury.

Silva, an Associated Press all-state choice, is the only returning starter on the line. And the disruptive defensive lineman has been encouraged by the work rate he’s seen from the returning crop of linemen in Blair’s garage — especially among the younger players.

When he returned from spending a month in California, he was impressed with the progress many of them made.

“These guys have completely transformed working out here,” Silva said over the sound of Young Thug thumping out of a speaker set. “Jake (Blair) being able to give them a place to work out has completely changed their drive. They’re here every single time we work out.

“A lot of people are like, ‘your O-line is gone,’ and ‘that class to graduate had the best O-line’ or whatever, but these guys right here, they work, man. And it’s all going to pay off when we get back on the field. They’re going to go off this year.”

One of those linemen is Colin Pearson. The 6-foot-1, 210-pound rising senior tight end/d-lineman reasonably could have seen the field more on a less senior-dominant team last year, but instead, he saw his junior season as an opportunity to learn from the most dominant line in the entire 4A classification.

“Some people will take (the season delay) to just sit around and not really do anything,” Pearson, whose offseason work has largely taken place in the Blair garage, said. “We’re trying to take this time to keep perfecting our craft, keep lifting, staying in shape. Personally, it just gives me more time to prepare.”

When schools across the state were closed during the spring, Blair started hosting workouts with around six teammates at a time. A friend loaned him a squat rack, and Blair gathered dumbbells, a bench and the necessary weights for a workout plan he adapted from past team workouts.

Blair, who holds offers from Idaho, Georgetown and Columbia, led the Papermakers to a 7-0 start before suffering a broken collarbone in a crosstown showdown against Skyview. The third-year starter watched Camas’ state title run from the sidelines, sometimes wearing a headset.

The players aren’t the only ones the meetups are benefitting.  Camas football coach Jon Eagle and his staff are not allow to run workouts or meetings in-person due to out-of-season rules and COVID guidelines. So having his captains running weight-lifting sessions without any coordination or prodding from coaches is welcome.

“It’s unbelievable,” Eagle said. “We could not ask any more from a captain to do this kind of thing. And it’s not just that, they’re getting out and throwing.”

Blair is determined to replicate the connection he had with his tight-knit line a year ago. And hopes as the spring season approaches, that spreads throughout the rest of the group. The Papermakers will enter the season state title contenders.

“Being together helps us out as a team and I think that’s going to be a factor in how we do next year — our chemistry and everything,” Blair said.