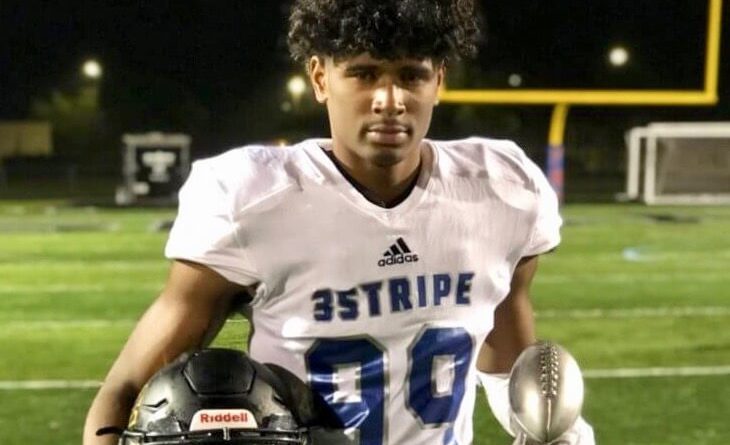 The first person Lincoln High School’s Jayden Wayne lined up against in a varsity football game last season as a ninth grader happens to now play in the Pac-12.

At defensive end, Wayne faced off against touted Camas High School tackle Caadyn Stephen, who is headed off to USC.

“He was one of the best offensive linemen around, and I felt like I did pretty good for my first time,” Wayne said. “It gave me confidence and stuff.”

Indeed, it did. Not only was Wayne a regular contributor along the Abes’ defensive line the entire way to the Class 3A semifinals, he started receiving plenty of notoriety nationally with Power 5 scholarship offers, all-star game invitations and All-American nods.

After last season, Wayne was named an Adidas All-American, and was selected to play in the annual Football University (FBU) All-American Bowl in mid-December in Naples, Florida. The 6-foot-5, 225-pounder was named the most valuable player of the defensive line group.

Wayne has five FBS offers already – California, Nebraska, Oregon, Tennessee and USC (and then quickly picked up two more offers from Washington and Arizona State after this story published).

None of the class of 2023 national recruiting rankings are out yet, but 247Sports football guru Brandon Huffman projects Wayne to be in the top 50 – at the very least.

And last week, Wayne accepted an invitation to play in the All-American Bowl in San Antonio, Texas as a senior in 2023.

Did we mention he ended spring quarter with a 4.0 grade-point average?

And yet, spend any sort of time around him, and what you will get is a flashy smile, a polite introduction – and very few words.

“He’s been great with us,” Lincoln football coach Masaki Matsumoto said. “He is a quiet kid with a good head on his shoulders.”

Matsumoto said there is always a concern when younger players receive the level of acclaim Wayne has this soon. But he added that the teenager takes it all in stride – much like USC-bound teammate Julien Simon.

“Obviously I want him to handle the attention really maturely, and he should not have any problem with that,” Simon said. “He is a mature young man. And at the end of the day, you still have to go out there and play football, and work on your game.”

Not surprisingly, Wayne considers Simon a mentor. Both are Ford Sports Performance (FSP) teammates in the offseason. And both are the same type of athletes who can fill different roles on the field.

“He’s always been my role model,” Wayne said. “He taught me about staying focused, on and off the field.”

With Simon deciding to enroll in college early, that leaves the door open for the likes of Wayne – a top-100 player on SBLive’s preseason list for 2020-21 – and new starting quarterback Gabarri Johnson (also 2023 class) to be the new faces of the program. Matsumoto said anywhere from seven to 10 sophomores could start on either side of the ball.

On defense, Wayne is expected to remain the team’s primary weak-side defensive end – but could see action in more of that hybrid role, too, if the Abes play a three-man front, asking him to play outside linebacker.

On offense, he will inherit the team’s starting ‘Z’ wide receiver role that Boise State-bound Jaylen Clark filled in 2019.

“We are looking forward to throwing it up to him in the red zone,” Matsumoto said.

Matsumoto said down the line, Wayne could be a national-caliber tight end prospect.

“Like I said, I appreciate all of that recognition,” Wayne said. “Now I have to go prove it.”