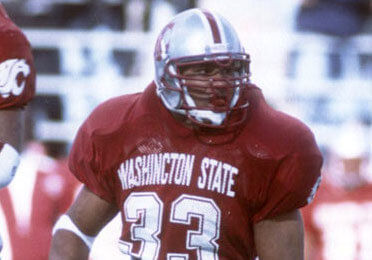 A Colorado native, Darling moved to the tiny logging town of Kettle Falls in elementary school – and eventually became the school’s biggest-name athlete.

He rushed for 1,700 yards as a senior in 1992, but got little recruiting interest (EWU, Montana, Montana State, Utah State). The Cougars took a chance on the small-town standout, and for his first two seasons, he sat behind two of WSU’s all-time greats – Anthony McClanahan (CFL) and Mark Fields (NFL).

When he finally got his chance, he was a star – twice an all-Pacific-10 Conference selection, and a second-team All-American as a senior in 1996.

Darling was selected in the second round by Philadelphia in the 1997 NFL Draft, and spent 10 seasons in the league (139 games).

Notable Stats: In 34 seasons coaching football at Chewelah High School, he won 163 games, which ranks in the top 75 all-time.

He was the big two-sport standout in the 1940s from the small town of Addy.

Most knew Pein for his work in football. He was an all-Evergreen Conference linebacker and center at Eastern Washington University, and was eventually selected as one of the school’s all-time greatest 100 players of the century.

But when he wasn’t on the field with those long arms and meat hooks (thick hands), he was in the boxing ring as the region’s premier heavyweight, winning the 1948 Pacific Coast title.

Pein played in an NFL exhibition with the New York Yankees in 1950, but the Korean War interrupted his short career. He tried going back three years later, but was cut by the San Francisco 49ers – and he eventually landed in the Canadian Football League.

Perhaps his greatest achievements came as the longtime football coach at Chewelah where he led the school to the state championship in 1977. He also coached basketball, baseball and track and field, and was eventually inducted into the Washington State Coaches Association Hall of Fame.

Archie Buckley, Colville (football, basketball, baseball) – Played all three sports at WSU, and orchestrated one of best Apple Cup wins (1929) of all-time at quarterback; went on to become a World War II hero.