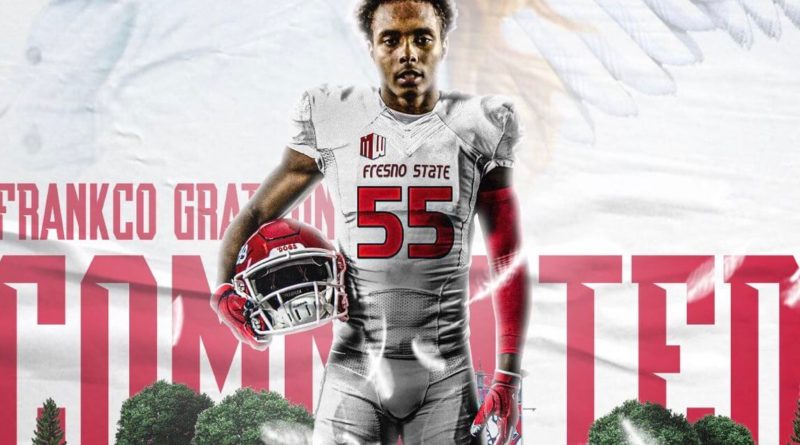 Football is Frankco Gratton’s ticket to a free college education.

But his prowess on the field isn’t what the Rainier Beach defensive end is most proud of.

Gratton announced his commitment to Fresno State on Monday, the birthday of his late older sister Ayanna Redmond-Gratton, who died in 2016 in her sleep from a seizure shortly after her 21st birthday. Frankco was 13 at the time.

“I grew up watching you take care of business and go to school, and here I am following your footsteps,” Gratton said in a post on Twitter.

He credits his improvement in the classroom over the last 12 months that made him eligible for a Division I offer to his late sister — he calls her his “guardian angel” — who was the first of his four siblings, all sisters, to go to college.

“It’s one of my biggest accomplishments,” Gratton told SBLive Washington. “Little did I know, all that energy I put into football, I could put into the classroom. And it really worked out for me.”

In Gratton, Fresno State gets a 6-foot-4 (6-5 with cleats on, he quips), 210-pound pass-rusher who is poised to have a breakout senior season, whenever that may be. He’s also a versatile athlete who helped a young, inexperienced Rainier Beach basketball team make a run to the 3A state semifinals in March.

“He’s smart, intelligent and fearless,” Rainier Beach football coach Corey Sampson said. “He can recognize block schemes and has a motor out of this world.

“He’s going to have a humongous season. The impact he has, you’ve got to double-team, triple-team him.

Early in his junior year, Gratton was hearing from power five schools like Oregon and Washington. They were sending letters, inviting him to watch games from the sidelines. Eastern Washington had offered. Washington State, Oregon State and Boise State were also among the schools that showed interest, and it’s within reason that power five offers would have followed had Gratton been able to compete this fall.

All along, Gratton knew his grades weren’t where they needed to be. His GPA hovered below a 2.0 as an underclassman. Sampson made it a point to keep Gratton focused on his books.

“We all stayed on him and made sure he had the proper support system to get through,” Sampson said.

Sampson knew that Gratton was a Division I prospect, and with better grades, he’d be eligible for a college scholarship. But ultimately, improving Gratton’s grades had to come from within.

Three weeks into the 2019 season — Gratton’s junior year —he took a helmet of an opposing player to the side of his knee and suffered a sprained MCL that sidelined him for the remainder of the season. He’d already missed most of his freshman season, and the contact from the Oregons and Washingtons stopped once he was hurt, Gratton says.

Sitting on the sidelines laid plain and bare, Gratton says, that football is just a game. The breakout junior season he expected to have was taken away in a second. So he decided to take all of his energy and put it into school. Over the last 12 months, he raised his grades to around a 3.0, a trend he’s hoping to continue throughout his senior year.

Gratton called Fresno State defensive line coach Eric Schmidt and defensive coordinator Williams Inge in early July, as well as head coach Kalen DeBoer. He told them he wouldn’t announce until the end of the month — his late sister’s birthday.

She was seven years older than him, and was enrolled at the University of Washington when she died. Gratton is determined to carry on her memory by graduating college.

“Even though her grave site is so many miles away from me, her spirit is with me every day,” Gratton said. “Her knowing I’m going in the right direction is like me following in her footsteps.”