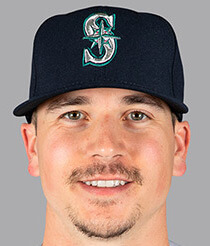 Steve Short not only knows which big-league player he is going to add to his fantasy-baseball roster this week – he knows the guy personally.

Taylor Williams was an all-state pitcher at Camas High School a decade ago – the program that Short now leads as its coach.

Williams came on for his first career major-league save Sunday in Seattle’s 7-6 victory over Houston, the reigning American League champion.

The right-handed reliever worked around Michael Brantley’s RBI double in the ninth inning to strike out the side. And it wasn’t just any ordinary three batters he sent down. It was George Springer, Jose Altuve and Alex Bregman, whom he got swinging on a 3-2 slider to end the game.

It was a seminole moment for Williams, who turned 29 earlier this week. He was picked up off waivers by the Mariners in February after three seasons with the Milwaukee Brewers.

“Getting your first save is pretty cool. It’s a pretty surreal moment,” Williams told reporters afterward.

“I was a Mariners fan growing up, so it’s a blessing just putting this jersey on every day. Going out there and getting my first career save as a Mariner definitely means a lot to me.”

Short was watching the game on television when he heard that Williams was up in the bullpen warming up during the eighth inning.

“I knew he was in (the Mariners’) alternate camp,” Short said. “But I didn’t even know he was on the 30-man roster.

But Short is very familiar with Williams’ ability. He coached a Vancouver Cardinals baseball team that Williams pitched against for the Federal Way Buzz back in 2010.

The Camas standout not only pitched a shutout, he also hit a home run.

That is the path Williams wanted to take in college – and beyond – being a two-way standout. After one season at Washington State University, he left to play at Mount Hood (Ore.) Community College in the NWAACC.

After that, Williams went to Kent State. That is where he focused solely on being a pitcher.

After being selected by Milwaukee in the fourth round of the 2013 MLB Draft, Williams lost two years after suffering a serious elbow injury that required Tommy John surgery.

But even sidelined, Williams kept making a favorable impression on the organization with his commitment to returning.

“They loved his work ethic,” Short said. “In fact, they would have him stay back (in Arizona) and help other guys rehab because he was so committed to it.”

Williams returned to become a key late-inning cog in the back of the Brewers’ bullpen in 2018 as one of the set-up men for closer Josh Hader.

He was back in an important role Sunday, just for a different team.

“I had an idea there was a good chance I would possibly go in to throw the ninth (inning),” Williams said. “I was ready for it.”

Added Short, who works with Williams’ father, Kelly: “He has that closer mentality.”