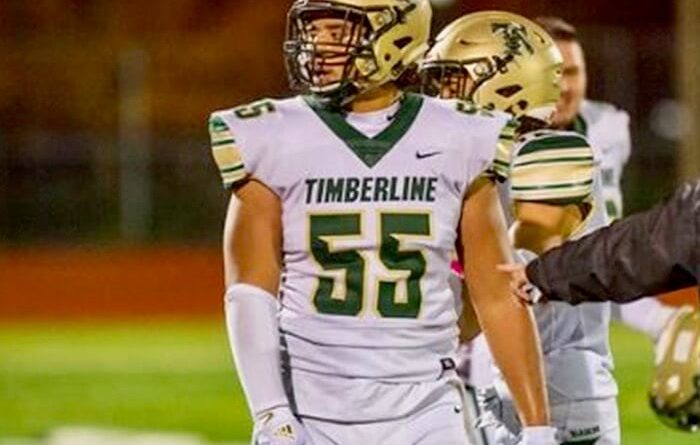 That meant tightening up the chinstraps on school life, including his grades.

And the 6-foot-3, 250-pound pass-rushing menace was rewarded with a string of NCAA Division I football scholarship offers (Hawaii, UNLV, EWU) starting in April, starting with the school for which he gave a verbal commitment to Thursday night – the Nevada Wolf Pack.

Because of his size, leverage and nimble movement – he has a rugby background – Togiola is expected to move more into the interior of Nevada’s defensive line.

“He is more of a ‘B-gap’ player,” said Jones, the former fullback at Oregon State University.

If you haven’t really hard of Togiola, it is OK – he is still a bit of an unknown, even after his all-3A South Sound Conference second-team rise last season as a junior.

In 2018, Togiola was a late arrival to Timberline football practices, and seemingly never got up to full speed as a sophomore.

It was after that season when Togiola looked around and saw a few of his buddies in town, notably Tumwater High School standout Jacob Schuster, receiving plenty of recruiting attention.

“He was tired of seeing those guys ahead of him,” Jones said.

“He matured a lot. He took on a whole different mentality that he wanted to compete against those guys being mentioned and being seen. That mattered to him.”

Even with the uptick in attention this spring, college coaches who tried reaching out to Togiola were coming up empty.

“One of the Nevada coaches called me and asked, ‘Is he interested?’ They weren’t sure because he wasn’t returning any of their phone calls,” Jones said. “I finally walked down to his house and told him, ‘You have to answer people’s phone calls.’

“He isn’t flaky, he just isn’t a normal teenager who is walking around with his phone everywhere.”

A big reason why Togiola pledged to the Wolf Pack was because they were the “first people in his corner,” Jones said.