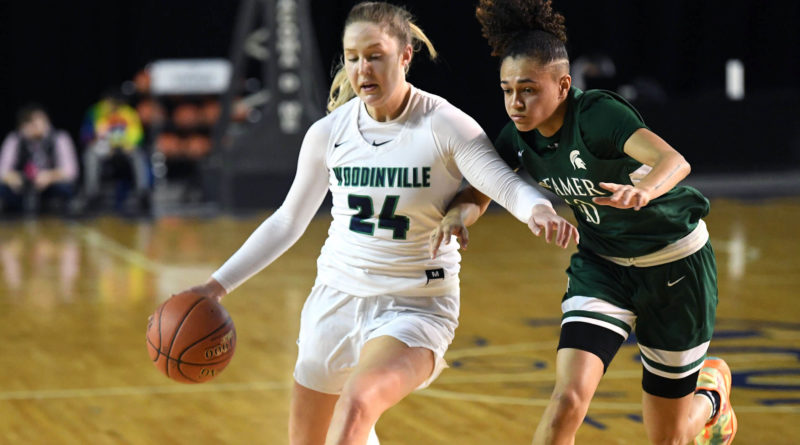 Even though Mia Hughes’ patented move on the basketball court is putting her head down and going for Woodinville High School – she is certainly not oblivious to what is going on around her.

Hughes is 5-foot-10. She has remained that tall for years. And she knows her best position is around the basket.

But Hughes, the reigning Class 4A state player of the year for the Falcons, also appreciated what one NCAA Division I program – Montana State University – saw in her. She announced Monday that she would accept a scholarship to play for the Bobcats in Bozeman as part of the class of 2021.

“I am never going to be a true post (player). I am not 6 foot or super big … and I know no matter how good you are, everyone wants the 6-8 girl,” Hughes said Monday afternoon.

“And just because of my size, I knew I was never going to be in a true position (in college). But coaches know I work my butt off to score, and I am a great teammate. I wanted a school that saw who I was.”

Montana State did – very early. It was the first school to offer her a scholarship (2018). And the Bobcats saw Hughes as a perfect combination-forward fit in their motion offense that features the pick and roll.

What’s not to like? All the two-time 4A KingCo player of the year has done in her career is be productive, even on the biggest stage. She has twice led the Falcons to the Class 4A state championship game, including last March when they were the top-ranked team in the state.

Hughes is already the school’s all-time leading scorer (1,783 points), and with another big season, she could slip into the top-10 in career scoring in Washington state history.

In 85 games at Woodinville, she has averaged 21.0 points and 7.6 rebounds per game while shooting at a 51.9-percent clip from the floor.

SBLive had Hughes ranked No. 3 in the 50 most impactful girls basketball players in Washington after the 2019-20 season.

Hughes said she made an unofficial visit to Montana State last July as part of an individual camp. She arrived a few days early to see the campus, and hang out with the players.

Hughes is also a high-academic student, and plans to pursue a double major in business administration and sociology.

Her long-term goal is to become a police officer – and she has already started planning toward that as a participant in the King County Explorers’ program. She has also trained in boxing, and really gotten into CrossFit in the past year.

As far as basketball, Hughes also continues to work on her game – and said he will be even a more well-rounded player as a senior.