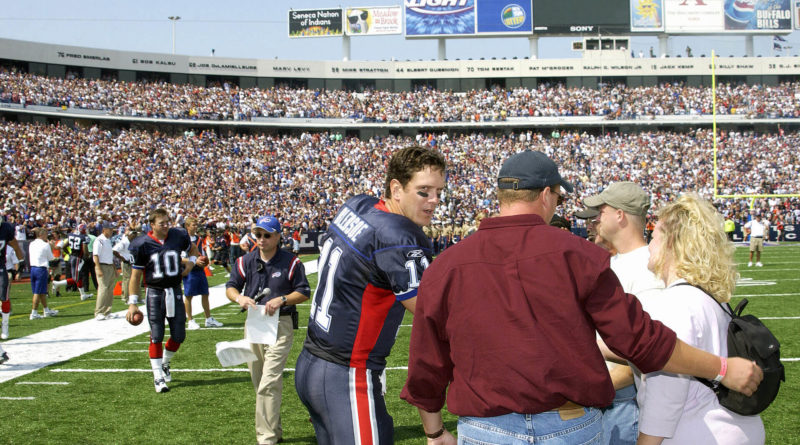 If Elway didn’t happen to be born here (Port Angeles), Bledsoe would be considered the greatest quarterback to ever hail from the state.

He was a big-armed phenom as a teenager – first as an all-state performer at Walla Walla, then at Washington State University where he was the Pacific-10 Conference offensive player of the year in 1992.

Bledsoe was the top overall pick by New England in the 1993 NFL Draft, and instantly became the team’s starter as a rookie. In his second season, he rallied the Patriots to an AFC wild-card berth, and was selected as a Pro Bowl alternate.

From 1993-2001, the Patriots went to the postseason four times, including Super Bowl XXXI in 1996-97, losing to Green Bay. After suffering a serious injury, he eventually lost his job in 2001 to Tom Brady – and never regained it (although he was the backup in the Patriots’ Super Bowl win in 2001-02).

He later would play for Buffalo and Dallas, but made his mark in New England, eventually inducted into the Patriots’ hall of fame in 2011.

Very few counties in Washington can brag they had the best athlete in the world in a particular sport – and Walla Walla can with this barnstorming legend.

In the midst of a tough upbringing – he toiled without a mother (with whom he reconnected later) and was basically homeless – he discovered he had a unique gift: pitching a softball underhand.

He launched his four-player “King and his Court” circuit in the Northwest in the 1940s, and not only toured to all 50 states, but all over the world. They came to see him throw.

It was a sight to behold: He regularly threw a fastball at 104 mph (and according to some witnesses, it was clocked as high as 114 mph) from all different angles and windups.

He not only played in big-league ballparks, but held exhibitions on military bases, in rodeo arenas and at parking lots. And he once struck out a row of future MLB hall of famers – Willie Mays, Roberto Clemente, Brooks Robinson, Willie McCovey, Maury Wills and Harmon Killebrew – in succession.

By the 1970s, his showcase games were on television – and seen in front of millions of fans over a 55-year career. He was inducted into Baseball Reliquary’s Shrine of the Eternals in 2013 – six years after his death.

David Bingham Jr., Walla Walla (baseball, football, basketball) – Led Blue Devils to only 4A baseball title (1988), and was NAIA All-American at Lewis-Clark State College before being drafted by the Atlanta Braves.

T.J. Conley, DeSales (football, basketball, baseball) – Two-time 2B state player of the year at quarterback was also state baseball player of year in 2003; had NCAA’s top punting average at Idaho before NFL tryouts.