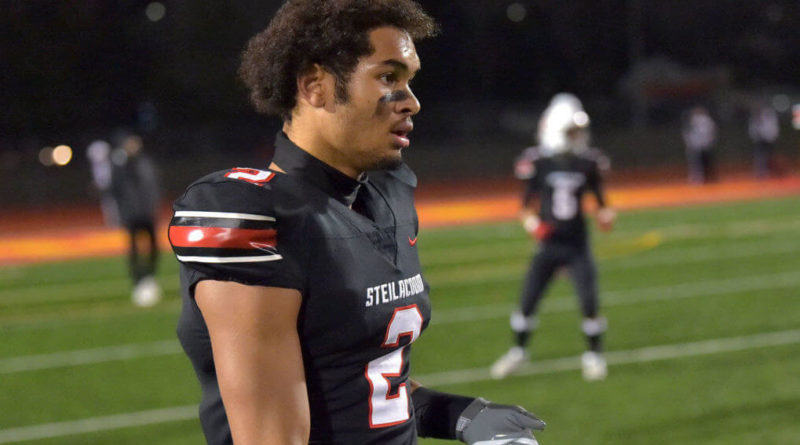 A key part of this talented senior class – and the 4A KingCo favorite – Edson will catch passes from Clay Millen, but he’s going to WSU as a pass rusher.

Arguably the top wide receiver prospect in the 2021 class, Egbuka is a generational talent for the Sentinels who makes tough catches look easy.

After coming into high school as a wide receiver, Esary is now Class 2B’s most dangerous skill-position player as a dual-threat signal caller.

Much like his dad, Mike (UW defensive end), Ewaliko is a big athlete who can run – and was a matchup problem for Metro League defenses.

He is the fourth-year program’s first NCAA Division I commit (Utah), and what makes him special is his ability to play all spots on the offensive line.

Uh-oh! This 3A PCL first-team middle linebacker has bulked up in the offseason, and will surely add more juice to his sure-tackling reputation.

He is the last guy in the Mid-Columbia Conference you want to see flashing in the middle. Catches everything in sight (1,298 yards, 13 TDs in 2019).

This Arizona commit is on the verge of becoming another big name from this star-studded team. Rangy at linebacker, he will rush more, too, in 2020.

Look who is back at Beach – one of the most dynamic outside-receiving threats in the state. Few can collect passes higher at the apex than him.

Don’t let this all-3A PCL first teamer get a clean look – either at strong-side linebacker or a deep threat at wide receiver. Also a standout wrestler.

After a second major injury, Hicks “retired” as a quarterback last fall – but has since rejoined the Mustangs as a pass catcher. Elite, impactful athlete.

Yes, Hill is a twin (brother Hunter on right) – and both create a heap of havoc along the Eagles’ defensive line. That is their winning territory.

He burst on the scene as a first-year starting quarterback in 2019, but his future is on defense. He’s gained muscle, and should be a two-way terror.

In three seasons, the UW commit has passed for a mind-blowing 11,741 yards. The smooth-throwing signal caller is ready to set all the records.

Graham-Kapowsin seems to have a knack of producing fast-twitching offensive tackles – first Foster Sarell (Stanford), and now this big man.

Even though he missed his sophomore season (knee), Iuli is still a coveted lineman prospect. He is leaner, faster and driven to move people in 2020.

So how did he become the 2A SPSL defensive MVP as a sophomore? He is so technical and twitchy at defensive end, he just buried rival ball carriers.

Don’t underestimate him based on his bantamweight frame. Jackson shut down all top wide receivers, and was an all-4A KingCo Crest cornerback.

If you thought you were seeing double last season, you weren’t – Jelsing, an Air Force commit, played everywhere on both sides of the ball. Electric.

Nobody had a quicker first step off the snap than Johnson, who racked up sacks – and a 4A KingCo Crown first-team defensive end nod for Bothell.

Trying to tackle him is like trying to stop a Hummer H1. And for the Cruisers, this UW commit played all over, including quarterback in 2019.

There was no better two-way player in Class 1A than this bruiser, who received all-state honors on both sides. He committed to WSU in the spring.

Another two-way beast, Krouse was an all-state linebacker for the best Class 2B team in Eastern Washington. Also a three-time state wrestling champion.