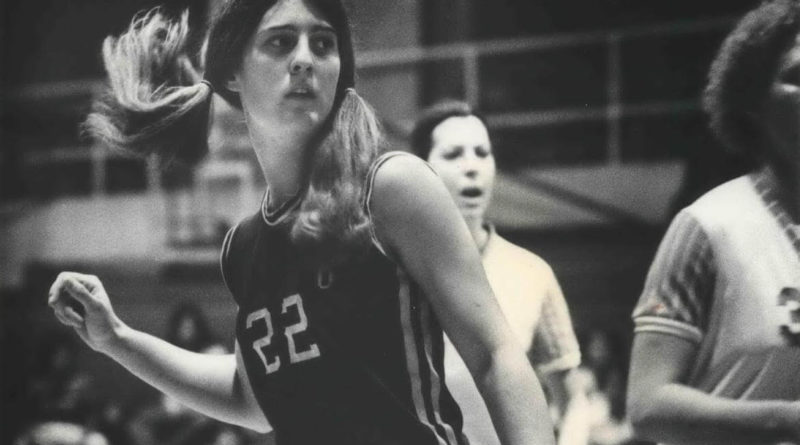 Notable Stats: In May, Helfer – WSU’s all-time leading basketball scorer for 38 years – became the 19th Cougars athlete (and second woman) to be inducted into the Pac-12 Hall of Honor for career achievement in athletics.

Even at the dawn of Title IX, Helfer was already an established sports hero in Walla Walla.

People would come and watch her in basketball, which landed her the first scholarship for a female athlete at WSU. They flocked to see her throw the javelin (and win her only state title). And in volleyball – her No. 3 sport – she wasn’t too shabby, either, as a two-time league MVP.

In basketball, she could do it all – shoot, rebound and pass. Twice, her Blue Devils’ teams were state runners-up, and finished with a 56-6 record in three seasons. She left the program with a 25.1-point scoring average, and was a 1977 high school All-American.

After becoming a successful basketball and track and field coach at Mead High School and Mount Spokane High School, Helfer was inducted into the WIAA hall of fame in 2010.

If you made a list of the best girls hurdlers to ever come out of the state of Washington, Hering would be on that short list.

She was that dominant.

Known for her relentless work ethic and thirst to be perfect technically, Hering won seven WIAA state individual track and field titles while in high school (1991-94) before going on to become an All-American performer at Eastern Washington University.

Hering now lives on a farm in Gig Harbor with her husband, Todd, who was a former standout sprinter at Pullman High School.

Alyson Ambler, Walla Walla (softball) – Led the Blue Devils to the 4A title in 2011, and was Gatorade state player of the year and high school All-American before becoming a two-way standout at UConn.

Jamie (Weisner) Scott, Walla Walla (basketball, track and field, volleyball) – Pac-12 women’s basketball player of the year (and WNBA draftee) would have been higher on list had she not grown up in other counties.