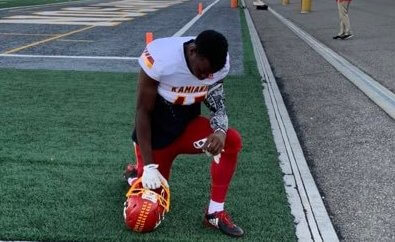 Woodley Downard waited with bated breath as the minutes counted down to 4 p.m. He looked up at the clock, which read 3:59, and nervous excitement set in as he was surrounded by family and several friends on Sunday as he readied his phone.

“In 15 seconds my life’s about to change forever,” Downard said. “This is the biggest decision of my life.”

Downard, a standout receiver at Kamiakin High School, dialed Eastern Washington head football coach Aaron Best on speaker phone and broke the news: he was committing to be an Eagle.

“Best was yelling ‘let’s go!’ He was excited,” Downard, who chose between the Eagles and University of Idaho, said.

Eastern Washington offered in late February, his first Division I offer. Downard said the Eagles were always going to be a frontrunner because of the success of the program and the familiarity growing up in Central Washington. As the recruiting process bore out, he was struck by how committed the coaching staff was to recruiting him as a person. That came in the form of handwritten letters, calls and contact from nearly every coach on staff.

“The way they got to know the person behind the player just really caught me,” Downard said.

Kamiakin, which made the regional round of the 3A state playoffs in 2019, returns a talented group that includes fellow three-star recruits in running back Tuna Altahir and 6-foot-6 athlete Messiah Jones, neither of whom have made their respective college commitments. Both have offers from Eastern Washington, among others, which is exciting to Downard.

“It’s really cool that I’m able to share this moment with them, knowing that like I could play the next four years of this sport with them, this sport I started off my friendship with them in,” Downard said.

Downard, a 6-foot-2, 195-pound speedster, logged 45 catches, more than 850 yards and nine touchdowns as a junior. He’s spent much of the COVID-19 shutdown lifting in his garage and running routes.

The moment comes in a time of uncertainty for not just Downard and his teammates, but also high school football players around the country. Sports in Washington have been sidelined since March and the fall season has been delayed two weeks so far, with further delays potentially on the horizon.

Editor’s note: Upon initial publication, the subject of the lead photo was incorrectly identified as Woodley Downard. We’ve updated the story with an accurate photo and regret the error.