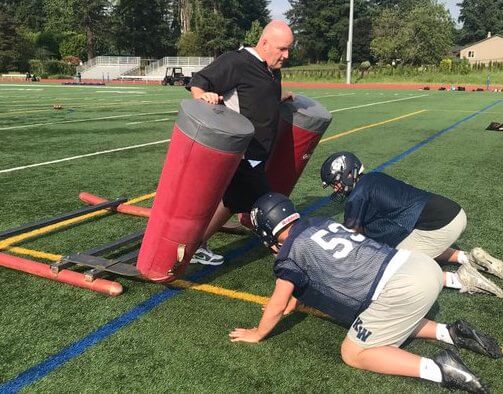 King’s Way Christian, a 1A private school in Vancouver, will not have a high school football program for at least two years due to low turnout, athletic director Brad Butterworth confirmed to SBLive Washington on Monday.

The news was first reported by The Columbian.

As uncertainty looms around if, when and how a fall high school football season will take place in Washington amid the ongoing coronavirus pandemic, King’s Way saw an opportunity to “hit the reset button” and bring stability to a program that has had four head coaches in six years.

The school will instead allocate athletic budget funds into its middle school football program, which Butterworth hopes will grow steadily over the next couple of years and create a pipeline of athletes for its high school program upon return.

“All COVID did was shined a light and showed us we can’t survive things like this,” Butterworth, who called the program’s step back a “pause,” said. “Why? Simply put, 10 years ago, we didn’t focus on our pipeline, our youth programs. We’re at a timepoint now where we actually have a little bit of breathing room to do that.”

The Knights, who went 5-5 and made the 1A state regional playoffs in 2019 with a roster of 24 players (six seniors), saw prospective varsity football turnout dwindling into the low teens throughout the offseason. That was even before the transfer of two all-1A Trico League selections Bryson Metz (first team, offense and defense) to Union and Mason Packer (honorable mention) to Skyview.

The athletic department hopes to bring back its JV football program in year three of a multi-year plan. Varsity football would return in year four.

In 2016, 1A private school Seton Catholic suspended its football program for a season and several players joined King’s Way’s roster. Butterworth, who was hired in April 2019, said the program would not be combining with another school’s football program, because it wouldn’t give returning players the option of playing for their boundary public school.

Defensive end Bailey Meek, the reigning league defensive player of the year, told SBLive Washington he will play football at his home boundary district school Ridgefield and has not decided whether or not he’ll return to King’s Way.

“I am not sure where I will be going to school but will 100% be playing for Ridgefield,” Meek said.

Meek has fielded 13 Division I offers entering his senior season.