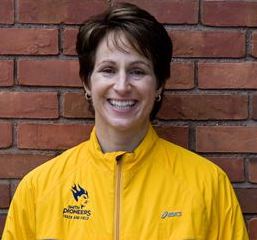 Notable Stats: Felton set records in women’s basketball (single-game mark of 36 points) and track and field (first to clear 6-0 in the high jump) in her only season at the University of Washington (1977-78).

Felton was such a dynamic two-sport star, she was mentioned as a U.S. Olympic hopeful in the high jump – and could have played professionally in basketball.

In high school, the all-state (undersized) center set the single-game state tournament record (39 points) in 1977, then jumped 5-11 in the high jump in the spring, which was tops in the nation that year. And she qualified for the USATF junior team in the pentathlon.

She was named one of the top 40 female multi-sport athletes in state history by the Seattle Times.

After that one spectacular debut year at the UW — she not only had a school-record 36 points, but scored 24 points three times as a freshman; and she cleared 6-0 in the high jump, which is No. 3 all-time in school history — she was set to concentrate on track and field full-time, but she got married the next year, and left the area to start a family.

Felton returned to sports 14 years later, becoming the NWAACC North player of the year at Olympic College (21.2 points per game; second player in school history to tally 500 or more points in a season), then played two more seasons at NAIA program Alaska Anchorage.

Notable Stats: In her final WIAA meet in 1985, Wheeler established the state’s all-time greatest javelin throw (old spec) at 189 feet, 7 inches. She is only one of two individual females to set an all-time mark at Star Track (Curtis’ Alexis Ellis is other in the triple jump at 43-6, set in 2018).

When you start naming the best track and field throwers to ever come out of Washington, the list should start with this Sequim standout.

Her 189-7 in Lincoln Bowl not only became the top in-state throw, but it was the national high school record as well.

Wheeler went to Stanford, and set not only the school women’s javelin record (192-2), it was a Pacific-10 Conference mark as well. She left as a four-time All-American.

Wheeler went on to make the 1996 U.S. Olympic team, won the 2003 U.S. outdoor title and was twice a national runner-up. Her personal-best is 206-0, which ranked No. 5 all-time by an American athlete at the time.

After competing for more than two decades, Wheeler went into college coaching. She is now the U.S. Paralympics track and field national team coach, and guided Rachel Morrison to a word record in 2014.

Tyna Barinaga, Port Angeles (badminton) – Winner of the U.S. Open in women’s singles and doubles in 1968, she is in sport’s international hall of fame.