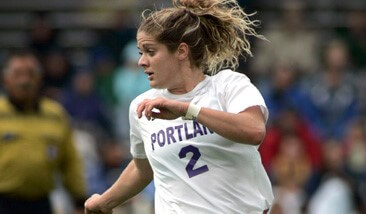 (The list is in alphabetical order. Lisa (Sari) Chambers feature photo from the University of Portland.)

When the Portland Pilots women’s soccer team reached the pinnacle, Sari was right there.

The Monarchs’ greatest soccer product was a starting holding midfielder on UP’s 2005 national championship team. A starter since her freshman year, Sari barely left the field that year as a junior, helping the Pilots accrue 17 shutouts on the season.

In high school, she was a three-time Greater St. Helens League MVP and the 3A state player of the year as a senior. She still holds the Monarch’s record for goals in a season (41) and in her four-year career (98).

She didn’t just show out on the pitch. Sari was also a first team all-league basketball selection and left the program as its all-time assists leader.

In the 1930s — more than a decade before the birth of the LPGA Tour — Muriel Veatch was among the best women’s golfers in the Pacific Northwest.

Among her long list of recorded accomplishments are winning the Oregon Coast Invitational in 1935, the National Women’s Western Junior tournament in Illinois in 1937 and back-to-back state women’s championships in 1939 and 1940. Her husband, John Holt, caddied for her.

Veatch-Holt, who passed away in 2005, attended University of Washington and, according to The Daily News of Longview, even played alongside World Golf Hall of Famer Patty Berg, who was among the founding members of the LPGA and still holds the record for tournament wins — 15.

Kourtney Eaton, Mark Morris (basketball) – Became the career program assists leader at UC Davis as an All-Big West first team selection after an exemplary career at Mark Morris, where she led the Monarchs — alongside her sister Karley Eaton — to two 2A state championships (2013, 2015) and three consecutive appearances.

Serena Settlemeyer, Kelso (softball) – Led Kansas’ softball team in wins on the mound, earning second team all-Big 12 honors as a sophomore and redshirt junior after a standout career at Kelso, where she was a two-time Gatorade state player of the year.

Jill Smith, Mark Morris (track and field) – Won the NCAA Championships in the javelin at University of Oregon in 1988 with a mark of 183-8, which garnered All-American recognition. As a high school athlete, she was a USA Today All-American, a 1986 AA state champion in the javelin and finished 11th in the U.S. Olympic Championships. Smith, who played basketball and soccer in high school as well, is in the Mark Morris athletic hall of fame.