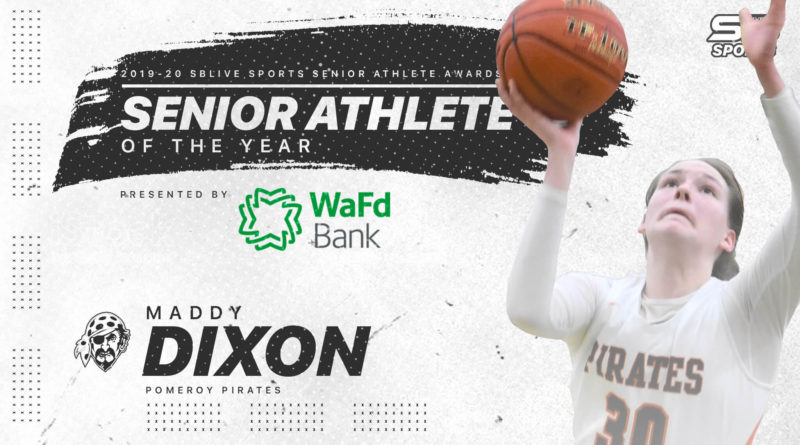 Maddy Dixon is always in a crowd.

Much of the town of Pomeroy in Garfield County came out to watch the 6-foot-1 Dixon play on the Pirates‘ state-contending varsity volleyball and girls’ basketball teams over the past four seasons.

But even after Dixon returns home, she cannot escape the “herd.”

Dixon, a two-sport standout who played for five state championships in her career, is SBLive’s Senior Girl Athlete of the Year in Class 1B.

She helped lead the Pirates to a 1B title in volleyball last fall, and a third-place finish in basketball in March after Pomeroy was ranked No. 1 in the state all season. She was voted the 1B Southeast player of the year in both sports.

“She is bound to do big things. It’s in her blood.”

Even though she claims she is not a “morning person,” Dixon regularly gets up early to do farm chores.

“My dad has to drag me out of bed,” Dixon said. “During basketball, it is also calving season. So on Saturdays, I will help out on the farm, then get on a bus to go play games.”

Dixon hasn’t played a spring sport (although she played softball in junior high). Instead, up until this year, she traveled with the Northwest Blazers, her AAU team. And she also has shown steers at local and regional livestock shows.

And in the summer, she has also been on the travel-ball circuit, and helped with the family’s wheat harvest.

“It has been super fun doing the things I love the most – working on the farm and playing basketball,” Dixon said.

Next step: Signed to play basketball at the University of Providence in Montana.

Senior-year highlights: Was voted the 1B Southeast player of the year in volleyball and basketball – and was selected as an all-state first team performer in both sports. … In volleyball, totaled 368 kills and 204 blocks as a middle blocker, and led the Pirates to their fourth state championship with a sweep of Oakesdale. … In basketball, averaged 18.0 points and 10.3 rebounds per game, and helped Pomeroy to a third-place showing at the 1B championships. She was named SBLive’s 1B state player of the year.

Career accomplishments: Played in five state championship games at Pomeroy – three in volleyball (2016, 2017 and 2019) and two in basketball (2018, 2019). Her teams posted eight top-three state showings. … Finished with 1,430 points, 936 rebounds, 150 assists, 182 steals and 152 blocked shots for her basketball career. … Was an all-1B Southeast selection all four seasons in basketball and volleyball (honorable mention as ninth grader, and first team her final three seasons in both sports). … In basketball, was voted to the Associated Press all-state team in her final three seasons (honorable mention as a sophomore, and first team as a junior and senior). … In volleyball, she was voted to the WSVCA all-state team twice – honorable mention as a junior, and first team as a senior. … Not a WIAA-sanctioned sport, but Dixon has shown livestock since the third grade, winning a Grand Champion Award.