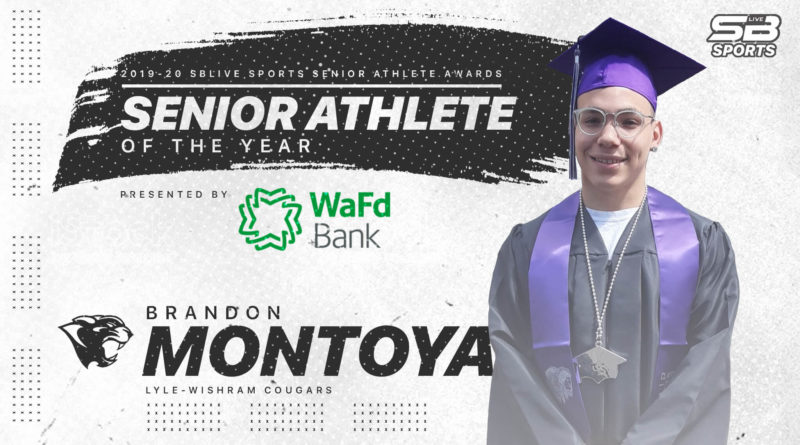 Brandon Montoya never had a trainer, never accessed a big, fancy weight room, nor did he play in front of many college football scouts.

But when you do the things he did on the football field and the track, you start to make a name for yourself.

Montoya, SBLive’s 1B Senior Athlete of the Year, leaves Lyle-Wishram as an eight-time individual state 1B track champion and a three-time 1B all-state football selection.

“I worked my tail off,” Montoya, an Eastern Washington signee, said.

Montoya racked up more than 7,000 all-purpose yards and 141 touchdowns over his career, per his coach and father, Antoine Montoya. And as a senior, he averaged 18 yards per carry.

Nothing was handed to Montoya, even though his dad served as the football program’s head coach. Brandon took mistakes and losses personally.

“He carries a lot of the weight on his back when things go wrong,” Antoine Montoya said.

The same logic applied to college recruiting. He turned heads with his production on the field, his speed and versatility. He wanted to show colleges that a running back from small-town Wishram on the Oregon-Washington border was worth a scholarship.

Eastern Washington offered him a 48 percent scholarship during his senior season. That was soon upped to a full ride, a moment Brandon will never forget.

“I was in my room with my mom and I just started bawling my eyes out,” Montoya said. “It felt like I just finally had accomplished what I’d really wanted to accomplish for a long time. I was working my tail off and it finally paid off.”

Montoya was a three-sport athlete for Lyle-Wishram before an ACL tear in the 2019 1B football state quarterfinals ended his prospects of playing basketball. He didn’t play hoops because he was a standout — “I was never really a basketball player,” he admits — but because he loved his teammates and always sought to be involved, even if it meant starting at center at 5-foot-8.

He held that the discipline and belief that committing to another sport would ready his body for anything.

“I held myself accountable to be doing something,” Montoya said. “Knowing that I don’t really like this very much, but I need to stay in shape. I felt like I needed to do it.”

Montoya will play running back at EWU. He hopes to redshirt and continue to mold his body for the college game.

He hasn’t ruled out running track for Eastern. Most of his early big school offers came in track. But for now, it’s all football. And all he can think of is getting into Eastern’s weight room.

“I don’t have very much weight equipment,” Montoya said. “Everything I do is on my own. I just can’t wait to get up there and take advantage.”

Next step: Will play football at Eastern Washington University.

Senior year highlights: Football (8-man): First team all-state selection. Rushed for 2,558 total yards at 18.3 yards per carry, 255.8 yards per game. Logged 447 yards receiving. Had 55 total touchdowns. Defensively, he had 86 tackles, seven interceptions, two defensive touchdowns. Track and Field: He would have entered a three-event defending champion before the season was cancelled due to COVID-19.

Career accomplishments: Football (8-man): Three-time all-state selection who rushed for just under 7,000 yards, more than 100 rushing touchdowns and 300 tackles. He logged 134 total touchdowns and 1.511 yards receiving. Track and field: Eight-time state 2B track champion, capped with a three-time individual title wins in the 100, 200 and long jump — all of which he set 1B/2B/1A state championship meet records. He was also a multi-year varsity basketball player.

School/community achievements: Was an ASB officer at for four years, including the student body vice president as a junior and school’s student body president at a senior. He graduated with a 3.4 GPA, per his father, Antoine Montoya, who is also the school’s head football coach.