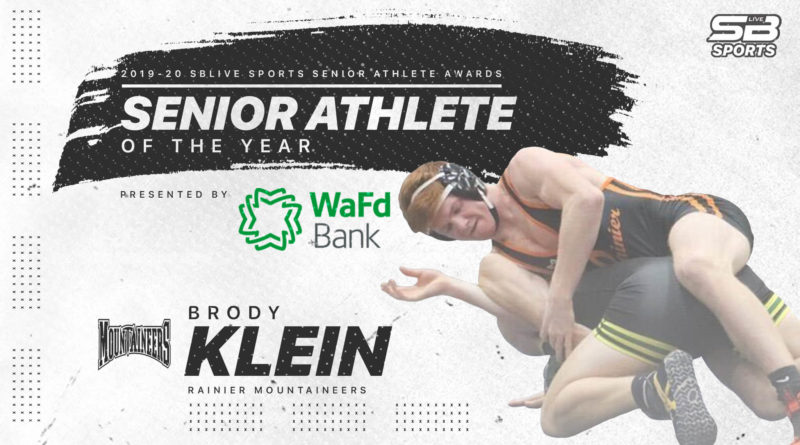 Brody Klein has seldom been among the biggest athletes on any team he’s been on, but before he rose to become a commanding leader and three-sport standout at Rainier High School, he recalls walking into the school’s doors as a 5-foot-nothing, 120-pound freshman.

Klein saw it as an opportunity. When he came out for football, he knew seeing the field was going to be an uphill battle.

“I’m going to work harder than the guy who’s ahead of me,” Klein said. “I worked my butt off just to be there. I had to work for it.”

Klein, who is SBLive’s 2B Senior Athlete of the Year, was raised by athletic parents in a household that preached hard work. His coaches say his state wrestling championship, state pole vault championship and leadership on the gridiron as a first team all-state linebacker can be traced back to an unrelenting work ethic — the kind that makes Klein a coach’s dream.

“He just had a work ethic that was unmatched by any other kid,” Rainier pole vault coach Steve Miller said. “You really didn’t need to push him to excel. He wanted to do it on his own.”

Rainier wrestling coach Chris Holterman said his faith in God is what separated him. He’d routinely see Brody at school working out before school started. “He is one of the two hardest working athletes I’ve ever coached,” Holterman said. He saw how Brody led by example. In his six years as Brody’s coach, Holterman said the two have grown close because of their Christian faith.

The sport Klein was first drawn to as a young athlete was baseball. He stopped playing when he got to high school to pursue track and field in the spring. His parents Chris and Shawna Klein were track athletes at Simpson College in Iowa.

His parents are where Brody says he learned his work ethic. Both were deeply involved in his athletics, too. His father, who is in the Army, took a year tour in Korea so that Brody and his older brother could finish out at Rainier. After his dad returned from that tour his sophomore year, Brody says he didn’t miss an athletic event.

“You could always hear him yell at football games; he was always next to the mat taking videos,” Brody Klein said.

“He sacrificed a lot. He knew how much staying here meant to us.”

Brody finds solace in knowing he has four more years to compete in football and track at Division III Central College in Pella, Iowa. In track, he’ll continue to compete in pole vault as one of the decathlon events.

He wasn’t able to defend his state pole vault crown this past spring due to COVID-19 cancellations, but his last competitive moment as a high school athlete was notable. He beat Kalama’s Abram Foreman 10-6 in the 160-pound 2B state wrestling finals after losing to Foreman twice during the season.

“I went out a winner,” Klein said.

As Klein approaches a move to Iowa, where he’ll be close to family, he braces for a new start. He’ll bring the mindset of the humble 5-foot-nothing, 120-pound freshman with him.

“There’s always gonna be somebody better than me,” Klein said. “But they’re not gonna work harder than me. That was my mentality. So they might get bigger, faster, stronger, but I’m gonna work my butt off to be with them the whole way.”

Next step: Will play football and track & field at Division III Central College in Pella, Iowa.

Senior year highlights: Football: First team Associated Press 2B All-State selection at linebacker. 1,337 all-purpose yards (121.5 per game) with 19 total touchdowns. Logged 114 tackles on the season as a linebacker. Wrestling: Went 42-2 on the season and won the 1B/2B individual state championship at 160-pounds, beating the opponent that gave him his two losses in the final. Track and field: No senior season due to COVID-19.