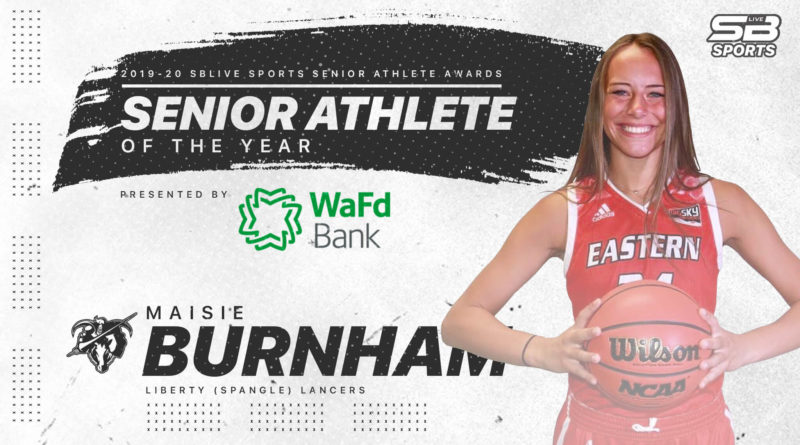 Living in the tiny town of Spangle in Spokane County, Maisie Burnham likes to keep things simple and easy going.

Naturally, as the youngest child in a storied basketball family, she enjoys shooting baskets or rehearsing ball-handling drills.

And when she is not playing basketball, she just likes hanging out with … you guessed it, her family.

“That is not necessarily a hobby,” she said, laughing. “But I have great aunts. I have great cousins. And I have great parents and brothers. I go hang out with them.”

And now, after what Burnham accomplished in her final season at Liberty High School, she has plenty of stories to tell as SBLive’s Senior Girl Athlete of the Year in Class 2B.

For starters, the consensus state player of the year led her school to its first state basketball championship, capping an unbelievable start-to-finish-ranked-No. 1 year. She scored an astounding 2,274 points for her career, which is a school record. And she signed to play at Eastern Washington University.

“She is a blue-collar kid,” Liberty girls basketball coach Chris Colvin said. “She doesn’t take anything for granted. She appreciates every opportunity she gets – and most importantly the people in her life who have influenced her.”

Growing up, Burnham was well aware of her family’s accomplishments in basketball. Her father, Blaze, was also a 2,000-point scorer at St. John-Endicott. Her mother, Cheri, won a state title at Reardan. And her brothers, Match and Chase, were Liberty standouts.

But it wasn’t those accolades that inspired Burnham. It was seeing their joy playing the sport.

“I saw my older brothers do it, and they loved it – so I wanted to do it,” Burnham said.

Burnham said a key moment in her development was deciding to join a traveling AAU team – the Northwest Blazers. She vividly remembered her first tryout in eighth grade.

“I went to a tryout in Cashmere, and I was the youngest player there by two or three years,” Burnham said. “And I just remember being stunned by all the amazing basketball players that were there.

“It was a scary experience, but it was a life-changing experience. That gave me a basis to keep growing.”

Burnham did just that, developing into one of the most dominant Class 2B players ever. But she won’t tell you as much.

“My parents (raised me) to be thankful for everything around me, because we are not the people we are without the help of others,” Burnham said.

Next step: Signed to play basketball at Eastern Washington University.

Senior-year highlights: Consensus 2B state girls basketball player of the year after leading the Lancers to their first state championship in school history. Burnham scored a team-high 22 points in the 2B title game victory over La Conner, and was named the tournament MVP. She was also the 11th-ranked player in SBLive’s postseason 50 most impactful players. She was also on SBLive’s all-classification all-state second team (and the News Tribune’s all-state second team as well). Burnham grabbed 2B Northeast South MVP honors for a second consecutive season after averaging 23.9 points, 9.7 rebounds and 4.0 assists per game. … In volleyball, she was also the 2B Northeast South player of the year, and a Washington State Volleyball Coaches Association (WSVCA) second-team all-state selection at outside hitter.

Career accomplishments: Finished with a school-record 2,274 points for her career, which ranks No. 23 all-time in state history. … She was named to the 2B Northeast South first team in all four seasons in basketball, and was an AP all-state first-team selection as a junior and season. … Burnham was the league MVP in volleyball in her final two seasons – and on the all-league first team since her sophomore year. … As a junior, she was named to the WSVCA all-state first team, and was on the all-tournament first team after helping Liberty to a third-place finish at the 2B championships.

School/community achievements: 3.9 GPA. Not only earned a basketball scholarship to EU, but earned a Dean’s Scholarship as well. Also was awarded a Liberty Community Education Foundation scholarship. … Has performed a lot of community services through Liberty of Spangle basketball (made Thanksgiving bags for Second Harvest), FFA (helped organize a school auction) and Vanessa Behan Crisis Nursery (helped youth shop for their families).