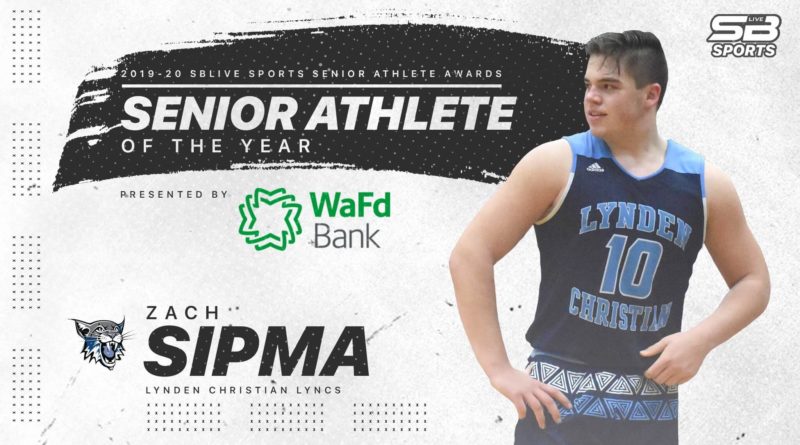 Zach Sipma recalls the utter exhaustion his body felt as he was going to basketball practice the day after playing in the 1A football state championship game.

But the payoff? Well worth the soreness, nagging ankle sprain and bumps and bruises that come with playing both sports. He wouldn’t replace it for anything.

Sipma, who is SBLive’s 1A Senior Athlete of the Year, is one of the few players across the state that played in a state football and basketball championship game in consecutive seasons in the 2020-21 school year.

But that’s just the kind of year it was at Lynden Christian, a 1A small-town basketball haven that just graduated a well-oiled senior class, many of whom began playing sports together at an early age.

“We’ve done more winning than losing since we were little,” Sipma said.

On the defensive line, Sipma was a monstrous disruptor who led a group of first-year starters as a senior. He was also a dynamic tight end with plenty of might to block for a flourishing run game, and enough athleticism to be a downfield threat.

In football and basketball alike, Sipma loves contact. Even when carrying a nagging injury, which he did with a rolled ankle that stayed with him for several months.

As an undersized big on the basketball court, Sipma always brought fight and relished contact. That’s how he gained an advantage over opposing bigs who towered over him. Plus, he had years of battling elder Lynden Christian bigs Cristian Colwell (6-foot-9), Cole Langstraat (6-foot-5) and Cole Bajema (6-foot-8) in practice.

“I know I’m never gonna be the tallest person on the basketball court,” Sipma said. “But my goal is to out-work you and out-physical you. That’s how I get my stuff.”

In both seasons, the Lyncs went toe-to-toe with state powers. And in both games, Sipma made key plays down the stretch. In football, they took juggernaut Royal to the final possession in a 26-22 loss. In basketball, the Lyncs took tall, versatile King’s to overtime.

Even in the wake of bitterly close losses, Sipma was able to appreciate everything the Lyncs had accomplished. He wasn’t able to make a run as a baseball player his senior year due to COVID-19, a sport in which he was also an all-league pick as a junior. His goal in high school was to play in one state title game, and he’d outdone himself in one year.

“Doing it once was my dream,” Sipma said. “Not knowing that I would do it twice my senior year, that was unreal to me.”

Next step: Will play football at Dort University in Iowa. Sipma plans to play tight end.

Senior year highlights: Football: First team 1A all-state defensive lineman, per the Associated Press. 1A Northwest Conference co-player of the year. Team-high 10.5 sacks, 11.5 tackles for loss, 63 total tackles. Basketball: Posted several double-doubles as the team’s leading rebounder amid a 1A state runner-up run. Was the team’s second option often times on offense down the stretch. Baseball: All-league selection as a junior.