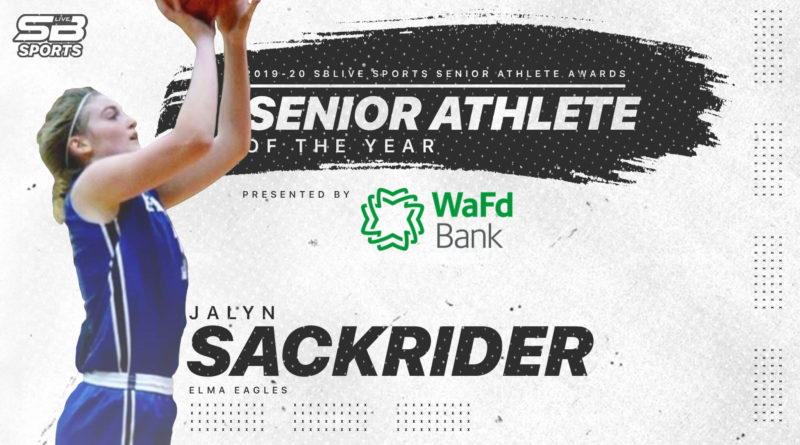 Just for fun, Elma High School’s Jalyn Sackrider will grab a bag of golf balls and travel to a small perch on the family’s spacious property and hit them to the grassy lawn below.

It was the pure enjoyment of competing that led her to play a variety of sports – and eventually to sign with The Evergreen State College in Olympia to play women’s basketball.

“My grandpa was super into sports, but nobody pushed me into playing them,” Sackrider said. “My parents would just sign us up, and if we liked them, we did them. And if we didn’t like them, we didn’t play them.”

Sackrider earned 12 varsity letters in basketball, volleyball and track and field, and is SBLive’s Senior Girl Athlete of the Year in Class 1A.

How did her passion for sports grow?

It started out as simple fun. Starting in first grade, she grew up playing basketball with friends for the community-based Elma Eagles program.

“It’s hard to say, but I’ve always enjoyed being with people, and your friends,” Sackrider said. “That helped my love for basketball grow, I guess.”

Once she reached high school, and discovered she had a real knack for scoring, especially in the post, she joined a more serious AAU club team – Olympia-based 90Ten, founded by Tumwater High School girls coach Robin Johnson.

Sackrider has blossomed at Elma, too. The past two seasons, she has been the 1A Evergreen Conference’s player of the year, leading the Eagles to the state tournament.

“She has a determination for everything,” said Lisa Saila-Johnson, who just stepped down as the Elma girls basketball coach a few months ago. “She is the type of athlete and competitor, if she doesn’t have it figured out the first time, she will work on that fundamental until she gets it perfected. It is the same with her academics.”

As serious as she is about basketball, Sackrider said she might be best in volleyball. She has been an all-state honorable mention middle blocker the past two seasons.

“It is just easier,” Sackrider said. “And it’s helped me get some of my anger out sometimes.”

As a ninth grader in track and field, Sackrider was encouraged to try to run the 400 meters and long jump “because I was tall and thin.” But she was never fast enough to win at meets.

So, as a sophomore, she got into the throws – and went to the state meet in her first season in the shot put and discus. She repeated that effort last year as well.

“The discus was easier because I had long arms,” she said. “The shot put has been more difficult … but in my junior year, both of them kind of clicked.”

A three-sport standout, Sackrider said something she saw at a seventh-grade basketball tournament in Tumwater has stuck with her throughout her career.

“On the wall, it said, ‘NNGU,'” Sackrider said. “It’s meaning was, ‘Never, never give up.’ That has helped me grow a lot. I always have shown the drive to get better.”

Next step: Signed to play basketball at The Evergreen State College.

Senior-year highlights: Received all-state honors in volleyball (honorable mention) and basketball (first team). … Led Elma’s volleyball team in kills (180) and kill percentage (.470), and was selected to the all-1A Evergreen Conference first team for a second consecutive season. … In basketball, Sackrider, a 6-foot-2 center, was voted the 1A EvCo player of the year in back-to-back seasons (averaged 18.0 points, 10.8 rebounds, 5.4 blocks), and led the Eagles to the state tournament where they were defeated by Freeman in the opening round. … A projected 1A contender in the shot put and discus, Sackrider’s senior track and field season was canceled because of the COVID-19 outbreak.

Career accomplishments: Finished with 1,160 points, 659 rebounds, 283 blocked shots for her basketball career. Was a three-time all-1A EvCo selection in basketball, and a two-time 1A state selection (honorable mention as a junior). She was on the “Olympian’s” All-Area girls basketball first team in 2018-19. … A three-time all-1A EvCo selection in volleyball, she was first team in her final two seasons at middle blocker. She was all-state honorable mention as a junior and senior. … In track and field, had four state podium finishes in the shot put (eighth place twice in 2018, 2019) and discus (sixth in 2018, fifth in 2019). Her personal-best throws were 37-11 1/2 in the shot put, and 119-4 in the discus.

School/community achievements: 3.85 GPA in high school (and 3.5 GPA in “Running Start” at SPSCC) and was class salutatorian; National Honor Society member for past three years; volunteered for local charity to fill up backpacks for homeless people.