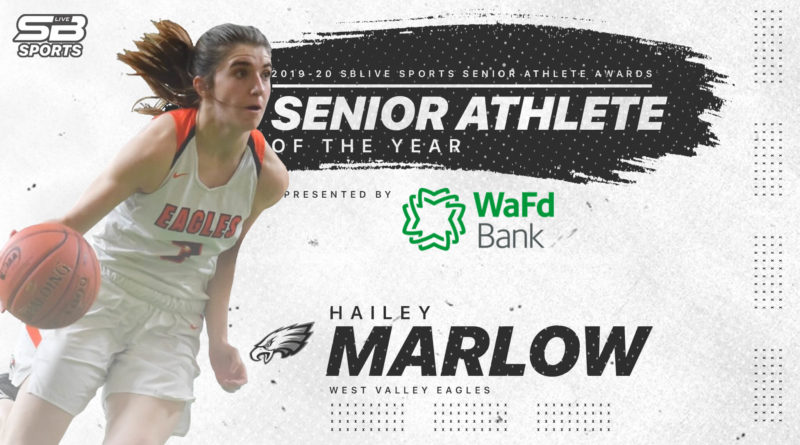 To get an idea how West Valley of Spokane’s Hailey Marlow works in life, consider these two snapshots during the rivalry basketball game with East Valley in mid-January.

As student-body president, it was Marlow’s responsibility to lead the Eagles in the annual “spirit games” skit for the golden throne. Because of that, she requested to leave the bench two minutes before halftime to change into a Hercules costume.

West Valley lost the halftime festivities, but that did not damper Marlow’s last-laugh impact. She hit the game-winner in the final seconds to topple the Knights, 52-50.

It is because of that caring, fighting spirit, along with her vast ability to play multiple sports, that she was selected as SBLive’s Senior Girl Athlete of the Year in Class 2A.

“I grew up with a basketball in my hand, so I have been comfortable with that sport,” said Marlow, who is part of Seattle Pacific University’s 2020 women’s basketball recruiting class. “I like the aspect of having to lead a team to victory, or accomplish a big goal.”

Seems like Marlow could do that in a variety of sports.

“But she’s good at golf,” Dave Marlow said. “And she can fire off a compound bow better than a lot of boys.”

If you ask Marlow what sport come most naturally to her, she doesn’t hesitate. It is track and field.

“Just because it is a lot of running, and you get to use your body in different ways,” Marlow said. “I’ve always known I was fast.”

And yet, when it comes to rightful recognition, Marlow has always felt like she’s been “overlooked” – especially in basketball as a senior when she lost out on GNL player of the year to Clarkston’s Ashlyn Wallace.

“That was a symbol of my entire athletic career,” Marlow said.

Which made leading the Eagles’ run to the 2A state title game against Lynden all the more special. She sank the game-winning 3-pointer in the state semifinals against Tumwater.

Next step: Signed to play basketball at Seattle Pacific University.

Senior-year highlights: Spearheaded the Eagles’ unexpected run to the state girls basketball championship game, losing to eventual winner Lynden. The four-time all-Great Northern League point guard (final three seasons as a first-teamer) hit the game-winning 3-pointer in the 2A semifinals against Tumwater. Marlow was named to the all-tournament team in Yakima – and then was selected to SBLive’s 2A all-state team. She was also 38th on SBLive’s 50 most impactful players in Washington for 2019-20. She averaged 14.6 points, 5.3 assists and 4.2 rebounds per game during the season. … Her softball season in the spring was canceled due to the COVID-19 outbreak.

Career accomplishments: Finished with 1,324 points for her career, and became just the second West Valley player to earn all-league honors in basketball all four seasons (Gonzaga signee Shaniqua Nilles was the other). … In her only season of softball as a junior, Marlow was named a Washington State Softball Coaches Association (WSSCA) all-state second team outfielder. She played in center field. … Marlow competed in track and field as a ninth grader and sophomore, and finished as one of the school’s all-time best javelin throwers, 400-meter runners and long jumpers. … As a libero, Marlow played two seasons of varsity volleyball.