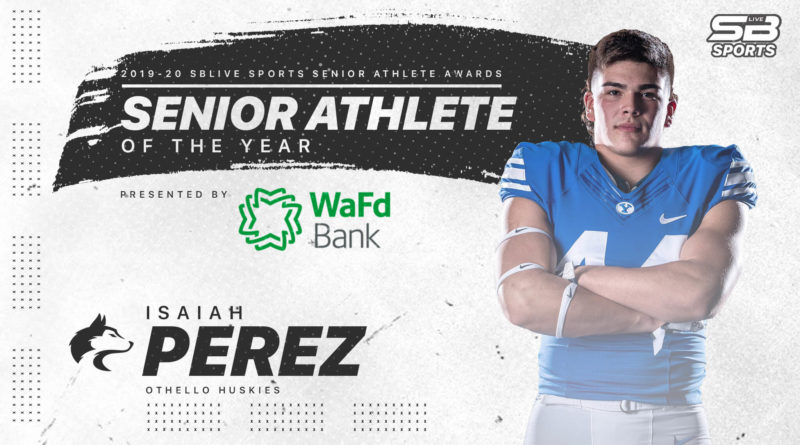 As he leaves Othello High School, the two-time all-state defensive lineman and first-ever three-time 2A state wrestling heavyweight champion still feels the bitter loss of his final spring season, which was canceled due to COVID-19.

“I really wanted to have a track season,” Perez said. “This was my last season to show up.”

Perez placed at state in throws as a freshman and his mom, Mandi Perez, is Othello’s track and field coach.

The accolades are impressive. But the mindset, work ethic and drive behind the awards are what makes Perez SBLive’s Class 2A Senior Athlete of the Year.

Perez is headed to BYU to play football. The same program two of his uncles played for will eventually mold Perez into a dominant defensive lineman. But first, he’s set to head to Brazil to serve his two-year LDS mission.

The 6-foot-3, 240-pound three-star defensive end is the first of his kind in wrestling — a three-time Washington state heavyweight champion. But as Perez leaves high school etched into state record books, his legacy will extend far beyond the medals.

“He leads in a positive way by his examples and encouraging words to help build the performance of those around him,” Othello wrestling coach Rudy Ochoa said. “He always displays great class and humility in all he does.  He is one of the hardest and smartest working athletes I’ve been around.”

Perez’s grip on the heavyweight class is striking.

After placing seventh at Mat Classic as a freshman at 220 pounds, Perez made the jump to heavyweight the next year and beat defending 2A state champ Cy Hicks of Tumwater 1-0 after pinning his way to the final.

As a junior, he pinned his way through the entire tournament to repeat. And in February, nobody got out of the first round with Perez. He won pins in 54 seconds, 1:19 and 42 seconds before meeting his friend Eduardo Mendez of Wapato in the final. Mendez took him the distance, but Perez won in a 6-3 major decision.

All in all, Perez pinned 10 of his 12 opponents inside the Tacoma Dome.

Facing Mendez in the finals was a highlight for Perez. When the official raised Perez’s hand as champion, Perez grabbed Mendez’s hand and raised it in unison.

“Seeing his growth throughout the year and seeing him be able to make it to the finals, it was just a fun match to finish off high school,” Perez said.

“His whole town cheered for him. That felt really good.”

Like many seniors across the state, Perez’s high school experience came to an unceremonious halt. But he’d already put a fitting bookend to his athletic chapter.

“I think it was good to end off on that good note to carry that on possibly through the college level,” Perez said.

Next step: Signed to play football at BYU.

School/community achievements: He was Othello’s ASB president as a senior, and attained a Seal of Biliteracy, taking several AP and college courses in high school … He worked the school’s “Little Huskie” football camp for two years and Little Guy wrestling club for four … served as an AVID tutor as a senior and worked with elementary, preschool and special education classes for three years.