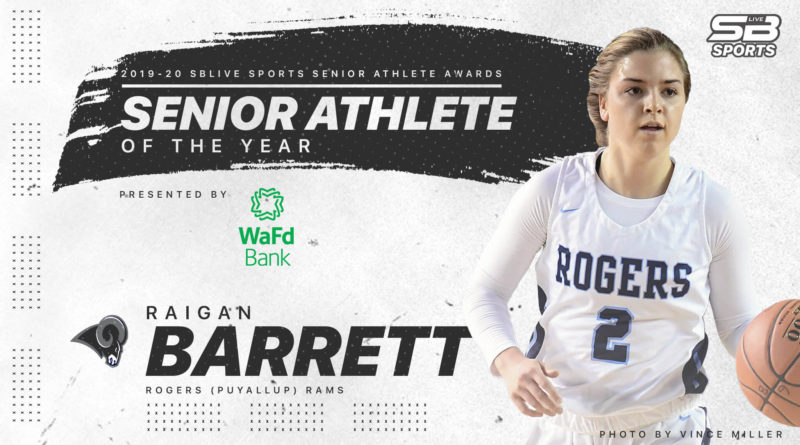 RELATED: RILEY CISSNE 4A BOY ATHLETE OF THE YEAR

Even though Raigan Barrett has been playing sports as long as she could walk, it was an early work-ethic lesson in another area of life that has stuck with her most.

“My work ethic comes from my parents,” Barrett said. “My dad (Greg) starting something (Barretts Collision) from the ground up – and he created a successful business.

“They preach it constantly – ‘Whatever you do, do it at 100 percent.’ That inspired me.”

Barrett, a Rogers of Puyallup High School senior, is not only a University of Washington softball signee as a shortstop, she was one of the state’s top basketball scorers as a point guard in 2019-20.

She is SBLive’s Senior Girl Athlete of the Year in Class 4A.

But there are times Barrett gets up in the morning, and doesn’t feel motivated to get her work in. In those circumstances, she sometimes plugs into something else.

“After a certain amount of time, things can get monotonous, and you don’t find that motivation,” Barrett said. “To have a brother out there working hard, it makes you want to work just as hard, if not harder. It shows you are not alone on that ride.”

In high school, Barrett said going from the winter basketball season to the spring softball season was a seamless transition.

“It was never a thing where I’d put the bat and ball down (in the winter),” Barrett said. “But because basketball was first, it got me quicker and more athletic … fielding for softball.”

In the end, why softball over basketball?

It was simple: Barrett got more recruiting attention in softball earlier in her career than she did for basketball.

“The more attention you get,” Barrett said, “the more confidence you get.”

Next step: Signed to play softball at the University of Washington.

Senior-year highlights: Was selected the 4A SPSL girls basketball player of the year in back-to-back seasons after averaging 22.3 points, 4.5 rebounds, 3.6 steals and 2.6 assists in leading the Rams to the league title, and a state-tournament berth. She was ranked as the 26th-most impactful player in SBLive WA’s top-50 rankings. … Even though her senior season in softball was canceled because of the COVID-19 pandemic, she was named the Gatorade state player of the year in 2020, and was on SBLive WA’s preseason all-state first team.

Career accomplishments: Finished with 2,013 career points in basketball, which is most scored by a boy or girl, in school history. … She was an all-4A SPSL selection for the seven seasons she played both sports. … She was a two-time News Tribune All-Area first-team selection in both basketball and softball. … She was named the Tacoma Athletic Commission’s athlete of the year in both sports – and the 2020 Sis Names female athlete of the year.

School/community achievements: 3.9 GPA; student-body president in ninth grade; volunteers at youth softball camps for her mother, Traci, who is the coach at PLU.