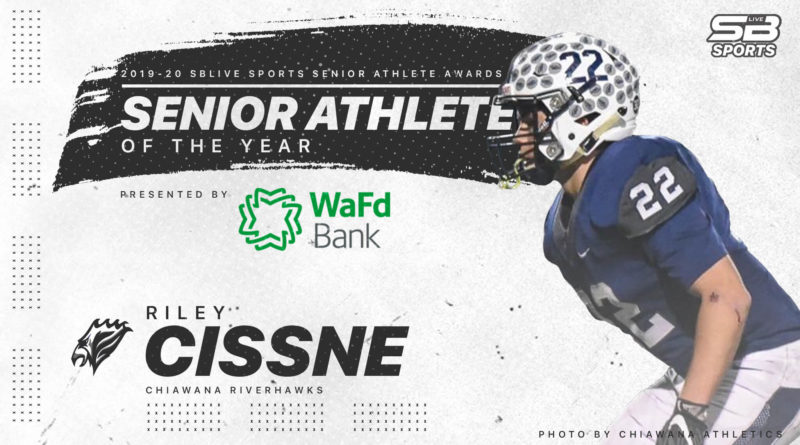 RELATED: RAIGAN BARRETT 4A GIRL SENIOR ATHLETE OF THE YEAR

As Scott Bond continues the transition from Chiawana’s offensive coordinator to the school’s head football coach, he’s confident in the group of players set to return. But there’s one question Bond had a tough time answering.

How do you replace Riley Cissne?

Perhaps it’s a loaded question. Is there really any way to replace a three-time first team all-Mid Columbia Conference linebacker, who coaches called a “coach on the field” and “the total package?”

“He’s the real deal,” Bond said of the team’s undersized and always over-prepared leader. “He was the leader. He knew what everyone was supposed to do. When they didn’t understand the call, they’d look for Riley.”

The same can be said on the baseball diamond as a catcher, where he was the league MVP as a junior. And in the wrestling circle, where he was a two-time team state champion. Seemingly everything Cissne is involved in, he excels.

For that, he’s SBLive’s 4A Senior Boy Athlete of the Year.

Cissne has fielded offers for football, wrestling and baseball, and could have reasonably pursued any of the three individually at the next level. Instead, Cissne narrowed down his college choice by picking a school that would allow him to play two sports. That narrowed the list to one: Whitworth University in Spokane.

“I talked to both coaches and they said it’s gonna be really tough but they said they’ve had kids do it before and make it work,” Cissne said.

It’s a rare feat, but one that was done by Cissne’s high school football coach Steve Graff, who played football and baseball for two years at Eastern Washington. Cissne says summers will include heavy preparation for football, and once the fall season is over, all attention will turn to baseball.

If his slight 5-foot-9, 170-pound frame allowed for opponents to underestimate him, he certainly took advantage. What he lacked in sheer size, he made up for in pretty much every measurable — and unmeasurable — category.

“He whacks you, he runs through you, he does all kinds of things,” Bond said.

Focusing on two sports also means he’s done wrestling competitively. Cissne’s Riverhawks won back-to-back 4A state wrestling titles over the last two seasons. Each of his four years, Cissne has placed at state — eighth as a freshman, eighth as a sophomore, fourth as a junior and third in February as a senior. He was a first team all-MCC selection all four years.

Cissne considers baseball the sport he’s put the most time into starting at a young age. At Chiawana, he’s left a legacy in all three.

At least one of his coaches is still trying to figure out how to replace him.

“If we could find (another) one, that’s a good deal for us,” Bond said. “Those are some hard shoes to fill.”

Next step: Signed to play football and baseball at Division III Whitworth University.

Career accomplishments: Two-time 4A state wrestling team champion, placed at state all four years (8th, 8th, 4th, 3rd). Three-year first team all-MCC selection in football at outside linebacker. Four-year all-league selection in baseball, MCC player of the year as a junior. He was one of the state’s top returning baseball players.