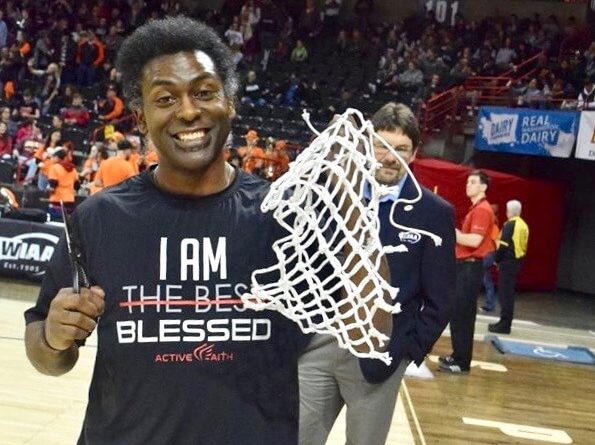 Chris Colvin is the girls basketball coach at Liberty High School in Spangle, the reigning 2B girls state champions. Our interview with Colvin is printed below. Questions and answers have been edited for clarity:

SBLive: Coach, how you doing today?

Chris Colvin: Man, I am fantastic. And I’m excited to be here with the opportunity to talk to you.

SBLive: Coach, I wanted to kind of get your thoughts on everything that has happened over the last week and a half.

Chris Colvin: So, obviously, it’s been a difficult ordeal on everyone in our country. And it’s been bittersweet following the progress of different events that have occurred and praying and hoping for positive change to come from all of these things.

We don’t live in a perfect world. And part of what makes everything good is that you have different people with different opinions. You have to work through those differences of opinions. And we’ve got to get away from just picking a side and saying, ‘well, this is my belief. So anyone that doesn’t believe what I believe out here is wrong.’ And instead, you need dialogue back and forth. And so each side or however many sides there are, can understand each different vantage point. And then I think that that education on all sides is when you start to bridge that gap between differences.

SBLive: Do you have a specific message that you’ve conveyed to your players or relayed to your students or even your own children?

Chris Colvin: I haven’t been able to get in contact really with our players at the high school level. This is something that I guess, has always been an ongoing conversation with my own biological children. However, again, I’m strong in my faith and and I believe in God and that’s something that is a part of our household. I never tried to teach my kids to have any one perspective on anything. It’s about being open minded, and, you know, sharing your experiences to help other people who haven’t had or may not ever have the opportunity to be in your position. And at the same time, again, it has to work the other way as well. You’re never going to walk in somebody else’s shoes, but you have to be able to listen and try to empathize with with their position. So I think the biggest thing for us is, like I said, God didn’t make any of us perfect, but he made us perfect for the roles that we’ll have to play in this lifetime, in this world and hopefully we’re all doing our best to be positive influences on the people in our circle of influence.

SBLive: You’ve lived in your share of small towns in the West. Is there a past experience that you’ve had that sticks out to you?

Chris Colvin: Yeah, I mean, there are many, both positive and negative. Again, I try not to dwell on the negative. It’s an unfortunate part of my life and many people’s lives. In my second year at University of Montana in Missoula, I was out with some teammates to hang out at the Perkins restaurant. We’re just driving home. My buddy had an old beat-up pickup. I’m in the passenger’s seat. We get pulled over. The officer stood at the driver side window. And my buddy rolls the window down and then, I don’t know what prompted it, but he left the driver’s side window and came around to my side and I was asked to get out of the vehicle and give my ID and information. And I think again, for better or worse, he saw my Grizz ring on my hand and we started talking about football.

Football breaks the gap there. I can’t say with any certainty what the outcome would have been had I not been a Montana Grizzly football player in that moment. But again at the same time, I know policemen that they are not my racial background who have never had any issue with me or I’ve never in that regard, either. So it’s a difficult subject to breach here. I think that these things are, you know, deeper-seeded.

But I think this is something that starts, really, in our primary school education. We think about it from a standpoint of ‘what are we teaching in our history classes to young people every day?’ They get to all of these kids or talk about all of the Caucasian European conquerors of the world, all of the Caucasian inventors, all of the leaders of politics and industry.

There are lots of groups around the world that have contributed to the greatness of, not only our country, but the entire world that these kids never even hear about. I think it works in both ways to affect multiple groups. If I never hear about my group doing anything successful in the world, and it’s always one group, it gives me kind of an inferiority complex as I grow up. And conversely,  if you’re in that other group where everything that you care about is how great your people are and all that you’ve accomplished, you may develop a sense of feeling superior to other people.

I think this is a deep-rooted thought process that starts at a young age. For me personally, it has to start there: How we raise our young people and how they are taught to view the world.