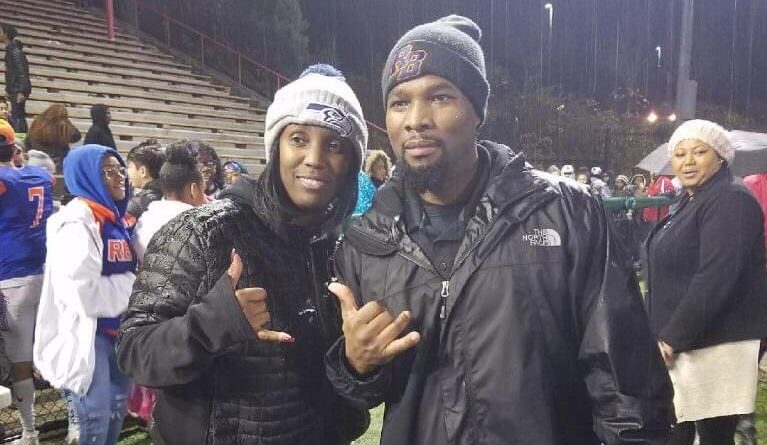 Corey Sampson is the head football coach at Rainier Beach. He grew up in Monroe, Louisiana before moving to Seattle where he attended Franklin High School. He played football at Northeastern Louisiana University, now Louisiana Monroe, in the mid 1990s. Our interview with Sampson is printed below. Questions and answers have been edited for clarity:

SBLive: We’ve reached the second week of these protests around the country and specifically for you, in Seattle, for Black Lives Matter against police brutality, systemic racism. How have you been following along with everything? And how are you holding up through all of it?

Corey Sampson: My kids, my son, and my family members, we got to just let him know that, we got to stand up and fight for what’s right. It’s been going on for a long, long time. I think now, people are just starting to get fed up with it and started saying, ‘OK, enough is enough.’ So I just say be educated about it. If in life, you’re telling people what’s going on, and they say ‘oh well that’s not really happening.’ But it really is happening.

SBLive: What’s it been like living in Seattle during this time?

Corey Sampson: It’s a little different. I’m originally from Louisiana. So I dealt with racism since I was a kid. But now it’s a little different in Seattle. Now you start to see more people just coming out and supporting than more people not supporting. So you know, it’s kind of like I’m glad Seattle’s stepping up and fighting back against what’s right and what’s wrong and speaking on it versus just running from the situation or pretending it doesn’t exist.

SBLive: Do you feel like you’re seeing a lot of people in your life who are stepping up, speaking out and showing up?

Corey Sampson: It hasn’t really affected me because of the quarantine. So people have called and reached out to me and talked to me on the phone, but I haven’t been with a large group of people. But from what I’ve seen, I feel like people are supporting the movement and what’s going on so I’m very impressed with it. I just hope when it all slows down a little bit people stay with it and still enlighten and still worry about Black Lives Matter, whether it be a two week or three week thing, things have got to change forever.

SBLive: What has to happen for this movement to sustain?

Corey Sampson: We gotta follow strict guidelines. We got to talk about it in school. We’ve got to make people uncomfortable talking about racism, and police brutality. It can’t be ‘oh, that’s too touchy of a subject.’ That can’t be an issue. It’s got to be talked about. It’s got to be discussed in a wide open room where people have questions and answers.

SBLive: As a coach and a leader in the Rainier Beach community, you have a unique position to be able to start those conversations. How have you discussed these issues with your team, your players? Have you had a specific message? You mentioned that you guys just had a zoom call.

Corey Sampson: No, I talked to the guys all the time about it. I mean, we deal with a lot. Us being a public school from the inner city, I’d say 95% of my players are African American, or Polynesian, other minorities. I mean, we deal with it all the time. We’ve been face-to-face with racism during games where refs throw flags, players are screaming the N-word or parents will wait for us to leave and it’s been going on for a long time, so I tell my kids ‘don’t fight with anger, fight with your minds. Then talk. You know, be educated about this issue we face. Don’t get me to be quick to fight back because people are racist to you. You got to talk to them about like, ‘what’s going on? Why are you acting like that?’ So you don’t act like how they portrayed you to be.

We talk in small groups, we talk in big groups. That’s something we talk about it, ‘we’re gonna go here, you never know what’s gonna happen.’ So those are things that I talk to my kids about all the time.

SBLive: For you guys, for you, for your players, this has been a lived reality for longer than this present moment.

Corey Sampson: Most definitely. A couple years ago we ended a playoff football game where it turned into a big old fight where a team was calling my guys names. I’m telling the refs, ‘hey, you’ve got to control the game, they’re calling my players all these names.’ After awhile nobody could control it anymore because they were letting these guys call them names, punch them low and pretend like nothing was happening.

SBLive: You mentioned growing up in Louisiana. You said you experienced racism from a young age. Is there an incident that sticks out to you that you wouldn’t mind going into?

Corey Sampson: Start with my uncle getting killed by a cop back in the late 70s. He got killed by a cop and the cop never did any time for it. … You know, riding our bikes in the neighborhood, white guys would drive and say ‘hey, you little N-words’ and keep on driving by. A lot of segregation back then. In college football, the white guys sat on one side of the bus, the black guys sat on the other side of the bus, or the plane vice versa. But there was never mingling between the races like that, it was more just ‘OK, you guys are there and we’re here,’ but we played as a team, so it was kind of different.

SBLive: I really appreciate your time talking about this. Talking to coaches from around the state in different sports, it feels like, and correct me if I’m wrong, these issues are being discussed now, especially among kids, more than before.

Corey Sampson: I mean, it needs to be discussed a couple times a week, not just when something happens. I’m saying it has to be discussed with all the kids all the student body, all the athletes at least couple times a week, then it will trickle down and we’ll start getting changes, because, to me it’s a learned behavior. If somebody is  teaching you that, that’s how you’re going to act.

I just keep on pushing the injustice and equality and making sure our kids are treated right. Because my kids are already at a disadvantage. We don’t have the program support with our guys as it is, so I’m dealing with guys fighting amongst themselves for survival in the street and then I got to deal with other stuff outside of that, so I talk about life all the time.