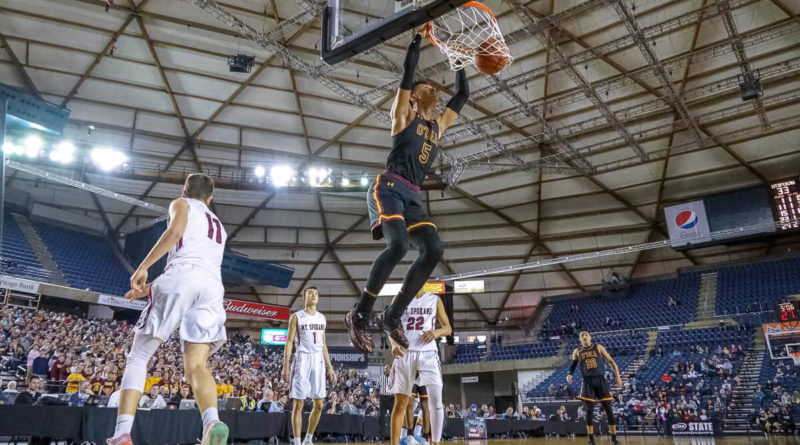 O’Dea forward Paolo Banchero, one of the top basketball recruits in the country for the class of 2021, was one of several high-profile athletes to speak to a crowd of hundreds at Liberty Park in Renton on Thursday during a conversation about race, social justice and police brutality.

The gathering, organized by University of Washington assistant coach and Garfield graduate Will Conroy, took place as hundreds gathered in Minnesota for a memorial for George Floyd, an unarmed black man who died May 25 after a white police officer put his knee on Floyd’s neck for nearly nine minutes while he was handcuffed on the ground.

He recounted a 2018 incident when Banchero and former O’Dea teammate Noah Williams, who are both black, were held at gunpoint by police over a suspected stolen vehicle while the high schoolers were driving home from a concert.

Banchero was 15 at the time.

“I remember telling the cop while he had his gun drawn at us ‘I play basketball,’” Banchero told the crowd Thursday. “’I don’t know what you’ve got this gun on me for, but we play basketball. We’re just here.’ Me and him are both crying. ‘We play basketball.’ I’ve been fortunate enough to have all the accolades and rankings and all of that, but at the end of the day, the cop, it don’t matter. He didn’t know that. He didn’t care.”

The King County Sheriff’s office ultimately issued an apology, agreed to pay an $80,000 federal civil-rights settlement and implemented new use-of-force guidelines as a result of a lawsuit filed after the incident, The Seattle Times reported in 2019. Banchero and Williams were only identified by their initials “P.B.” and “N.W.” in the report because they were both minors.

It was not publicly known the two were involved until May 28, when both spoke out about it on Twitter.

“Took me almost 2 years to speak on it,” Banchero wrote. “You never really understand the weight of something until it’s right there in front of you (literally).”

Banchero’s father, Mario Banchero, responded to his son’s Tweet with words of encouragement.

“You guys stood up and held the line for what was just,” he wrote. “I have never felt more helpless than I did that night and I have never been more proud than when the case was won. Keep that incident close to your hearts and continue to press for change. Love you both!”

Williams is wrapping up his freshman year at Washington State, where he started 13 games. Him and Banchero led O’Dea to the 2019 WIAA 3A state basketball championship.

Floyd’s death, which was filmed and widely seen, has sparked protests and riots around the country and world. The officer, Derek Chauvin, has been charged with murder.

Banchero stressed the importance that parents with children of color have frank and honest conversations with their kids about how to handle interactions with the police. And he implored kids to listen.

I would never have thought that I’d be up here, but unfortunately I had a situation two years ago where I had an encounter with the police. Me and my teammate at the time who is now in college. Very likely I think I could have lost my life. Before I get into it, all the parents out there who are parents of colored kids, if you haven’t had that talk with your kids about what to do when they encounter police, I encourage you to have it, because I feel like that talk me and Noah (Williams) had before that saved our life.

We were at a Chris Brown concert. It was over, and we were getting in the car to pick up his sister, and her friends. We didn’t get pulled over. We had actually drove by the cops. So we were waiting until a lot of traffic, we had the windows rolled down and music playing, and all of a sudden, a cop comes to the window, our windows were rolled down, and he’s got his gun drawn. He’s real aggressive, cussing at us, saying all types of stuff. All that. We just froze. I literally couldn’t talk. I couldn’t spit out words, I was so shocked about what’s going on. We’re just asking ‘why  you got your gun pulled?’ What’s the problem? We didn’t know what we did. We were confused. He’s not answered, he’s just giving us all types of orders. He tells us to get out the car. My friend gets out the car. I stay in the car, the other cop comes and tells me to grab the registration. This is my first time in the car, so I don’t know where any of that is at. I’m telling him ‘I don’t know where it’s at.’ He thinks I’m lying. He thinks we stole the car. He starts talking to me all type of crazy, while at the time my friend who has the gun pointed at him, he’s handcuffed.

They eventually realized they had messed up. They did some other stuff. They threw the keys in the car, so we couldn’t find them for like an hour, a couple things like that. I just want to say for the kids out here, it could happen to any one of you guys. I remember being in that car. I remember telling the cop while he had his gun drawn at us ‘I play basketball. I don’t know what you’ve got this gun on me for, but we play basketball. We’re just here.’ Me and him are both crying. ‘We play basketball.’ I’ve been fortunate enough to have all the accolades and rankings and all of that, but at the end of the day, the cop, it don’t matter. He didn’t know that. He didn’t care.

That’s my piece. It can happen to any one of you guys, boys and girls of color. So just be careful, man. Hearing about things before that incident with police brutality I thought, it wasn’t really something that happened in Seattle. That was my view on it. My mom would have those talks with me, I’d hear her out. But, you know, I didn’t take it too seriously. When your parents are talking to you guys, really listen. Understand what to do. Because I feel like me and my friend, luckily we were frozen, we did not move, I promise you. I feel like if one of us reacted violently — not violently. But I dropped my phone actually on the floor of the car and I feel like maybe if I would have picked that up and he jerks the car forward. I feel like I might not be standing up here and my friend might not be where he’s at. Just know how to handle the police. Parents, talk to your kids. Yeah man. That’s all I got.