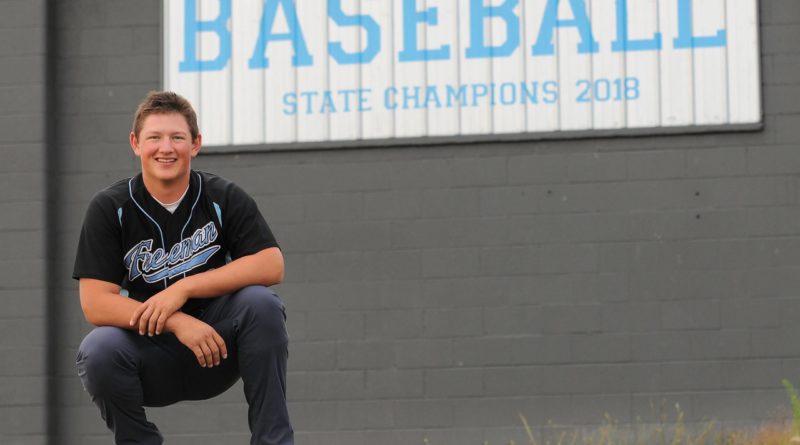 Jace Phelan can visualize the celebration like it was yesterday.

Standing on the mound at Yakima’s County Stadium, he felt a release — a rush of sheer joy. After throwing the winning pitch, he threw his glove in the air. “About 60-feet” high, he reckons. He made a beeline for catcher Konner Freudenthal, tackling him to the ground.

His mother, Lisa Phelan, sat in the stands in awe of her son. Then a sophomore relief pitcher, he had just secured the final two outs that lifted Freeman to the 2018 WIAA 1A baseball state championship, so perhaps it was just adrenaline that made his glove look like it was headed into orbit.

Everyone at the stadium knew there was something deeper at work.

“It was unbelievable,” Jace Phelan said. “That’s all I can really say about it. It was the coolest thing that’s ever happened to me. By far.”

It’s a moment that will forever be seared into Jace Phelan’s brain, and the highlight of a high school experience marred by unthinkable tragedy — the 2017 shooting at Freeman High School that left one of his classmates dead and several others injured — and now, nearly three years later, bookended by a global pandemic and the cancellation of his senior high school baseball season.

Phelan, a three-sport athlete, will participate in Freeman’s drive-thru graduation on Saturday. He saw firsthand how winning a state championship helped a band of brothers — and a community — heal.

“You’re always kind of thinking about the shooting in your mind that entire year. And that might have been the first moment where all of it was just gone,” Phelan said. “You were just in that moment celebrating with your brothers.”

All Jace Phelan could think about was his mom.

Shots had rung out at Freeman High School just after 10 a.m. on Sept. 13, 2017, and Phelan had just arrived at school on a late start day. He was in the locker room with several teammates, including Freudenthal, and head baseball coach Chad Ripke. Ripke shepherded the boys into his windowless office to take cover. Ripke pulled out his phone and called a student of his on the other side of the building.

“I’m like, ‘who?’ And he said the kid’s name,” Ripke recalled. “So I’m sitting there in my office with the boys. Talking to them, letting them know what’s happened.”

On the other side of the school, sophomore Caleb Sharpe followed through on a threat to friends and used a semi-automatic rifle to kill classmate Sam Strahan, and injure three of Phelan’s classmates: Emaa Nees, Jordyn Goldsmith and Gracie Jensen. Jace had gone to school with both Sharpe and Strahan since kindergarten.

Jace immediately thought of his mom, who was across the street at Freeman Elementary School. She was the principal. Jace needed to know she was OK.

He texted. And texted.

Learning that her son was OK allowed Lisa Phelan to stop worrying about him and focus on leading her school through a lockdown. Jace’s concern moved to making sure his friends were safe.

That’s when Ripke snapped into action. He knew he couldn’t stay put. He ran upstairs to where the shooting took place, in an area freshmen often congregated. He saw the principal and started to clear rooms and help with first aid on three students who had been shot.

“They kicked down both sides of the locker room doors,” Jace said. “I was the only one in the walkway so I had (assault rifles), a couple pistols pointed at me from the cops and so I was just standing there in complete shock. I’d never had a gun pointed at me, definitely not that many.”

Jace was one of the last students to leave Freeman High School that day. He still didn’t know all the details. A friend’s dad took them to Fieldhouse Pizza. He was wearing a Freeman t-shirt. Patrons’ concerned faces darted toward him.

News of the shooting was on every major news website and TV station.

“We got home and I just got a text from one of my buddies, he was like, ‘dude, we’re on the New York Times right now,’ ” Phelan said. “That’s when it all really was like, holy cow. This is not even close to normal for a high school career, but it’s unbelievable that it could happen to us.”

Lisa and John Phelan made it a point to be positive around Jace, and not show emotion when it came to the shooting. They didn’t push him to go to therapy. They didn’t go out of their way to bring it up. They wanted him to take the lead in talking about it. He’d let them know when he was ready to talk about it, they thought.

“It was hard for John and I,” Lisa Phelan said.

But many times, it was brought up organically. Like when it came up in conversation among friends. Or when Freeman students wrote letters to another school that fell victim to a shooting. Or when he was packing away clothes in his room and noted the shirt he wore the day of the shooting.

“It’s still there,” Lisa Phelan said. “It’s still very raw for these kids. And you think they’re doing okay, but it’s just so important to always check in on them and ask him or just be listening.”

Jace has read the news reports. He’s lived the community’s reaction. He’s played a role in its healing. But to this day, he has not been able to make sense of it.

Sharpe has not received a verdict in court. He still faces charges of first degree murder, three counts of attempted first-degree murder and 51 counts of second-degree assault, The Spokesman-Review reported. His trial is tentatively set for Oct. 7. He will be tried as an adult.

Nees, Goldsmith and Jensen all made full recoveries. The three girls are finishing their junior years at Freeman.

When Phelan ran out for warmups, he saw more fans than he had ever seen at a football game. The surrounding communities had showed up.

“Usually there are 10 people in the stands at that time,” Jace said. “It was just unbelievable how much support we had coming into that game and how everyone kind of had our backs.”

The teams joined hand-in-hand at the 50-yard line for a prayer before the game. He saw opponents wearing “Freeman Strong” shirts. The national anthem, Jace said, was the most powerful moment he can ever remember.

That night, a community began to heal.

Jace stands a burly 6-foot-1. One arm is slightly shorter than the other, as a result of a series of surgeries he underwent to remove benign tumors in his bone when he was in fifth and sixth grade.

He was a three-sport athlete who contributed as a freshman on the varsity baseball team. Ripke saw a future standout in Jace: A bulldog on the mound with a naturally powerful swing — “a complete player,” Ripke said.

As a junior, Phelan led Freeman to the 1A state quarterfinals. His season was nothing short of dominant. He’d begun studying the game. He watched videos of Mike Trout and Giancarlo Stanton train. He tried to emulate their approach.

It quickly paid off. He hit a whopping .698 and was named the 2019 1A state player of the year by the Washington Baseball Coaches Association.

“Baseball came very easy last year,” Jace, who is committed to Spokane Falls Community College, said. “I showed out. Honestly, I don’t know how else to put it, but I had the best season that I could ever hope for. It was unbelievable. When you walk up to the plate and you know you’re gonna get a hit, it’s one of the best feelings in the world.”

But to Phelan, nothing came together quite as perfectly as the 2018 season.

Phelan is the first to admit he was not in a good situation when he entered the 2018 state championship in the final inning. Starting pitcher Michael Cuomont had held his own, but hit the WIAA-mandated pitch count limit, and Ripke called upon his wide-eyed sophomore to close the game with a runner on first and one out in seventh.

John Phelan, an assistant coach, looked at Ripke. Are you sure?

Phelan can laugh now about the bubbling panic when he walked the first batter, recorded an out on a fielder’s choice, then gave up a hit to load the bases. The next batter came up with a chance to tie the game. A home run would’ve made it 6-6. The game rested in the hands of the Scotties’ “young pup,” as Ripke called him.

“I was just a sophomore that was as nervous as can be, but I couldn’t feel (my) arm because I had so much adrenaline going through,” Phelan said. “So I just stepped up and was trying to throw as hard as I could.”

But in reality, it was Freeman’s day. The Scotties had reached the state semifinals the previous four seasons, and the 2018 group, Ripke said, wasn’t even his most talented team. But they gelled.

Never was that more clear in the title game.

It was Ryan Hayek’s double play to end the first inning that made King’s Way coach Gregg Swenson’s eyes pop. It was Jordan Eskridge bare-handing a line drive down the third base line to end the second — “a big-league play,” Ripke said. And it was Desmond Parisotto’s throw home to beat a runner in the bottom of the sixth.

The Scotties would not be denied. There was something bigger at play.

Facing a 3-2 count, Phelan threw a fastball. He saw the batter swing through. Freudenthal caught it. He’d done it — they’d done it.

Amid the celebration, Phelan saw Ripke screaming with joy.

Even as King’s Way was vying to repeat as 1A state champs, the players understood the gravity of the moment for the Freeman community. Some King’s Way parents briefed their kids before the game. Coaches waited until after the game was over to bring up the shooting.

“It’s hard to get mad when something like that happens,” former King’s Way player Damon Casetta-Stubbs said. “It’s bigger than baseball at that point. I guess if we were to lose, that’s the way to lose.”

“They were making plays that were pretty special plays in the baseball world. Couple that with the backstory, there was nothing to be mad about,” Swenson said. “I remember watching them accept the trophy thinking ‘good for these kids.’ I’m usually not that type of loser. I’m a ‘get back on the bus and get out of here’ type loser.”

Since the baseball season was canceled in March, coaches and teachers have tried to find ways to honor and celebrate the senior class. Ripke said these memories have come back up and he’s thought about everything his group of nine seniors have gone through. And all they’ve accomplished.

“No kid deserves this,” Ripke said. “One, a school shooting, and two, not have your senior year to do what you love to do, and that’s play baseball. This is a great group. Jace being the leader of them all. Team captain and MVP and just a great inspiration to his teammates.”

It’s helped Phelan cope with the loss of his senior season knowing the success the team had reached the three previous years. He hurts for his teammates whose careers unceremoniously ended. But his baseball journey is not over. One long chapter — both tumultuous and charmed — has finished.

“It definitely helps knowing that you left everything you could … on the field,” Jace said.

Andy Buhler is a statewide preps reporter for Scorebook Live Washington. Hear him weekly on the Scorebook Live Today podcast, follow him on Twitter @AndyBuhler; email at andy@scorebooklive.com.