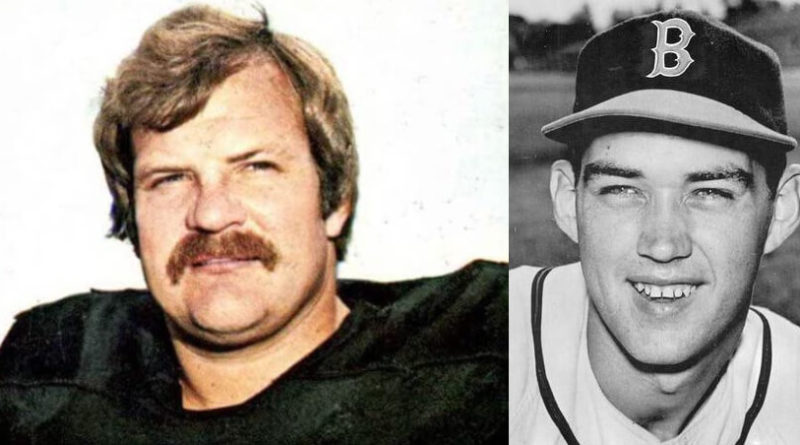 Notable stat: He was a three-year starting quarterback at Kennewick.

Carriker played under center in high school. He went on to find a career’s worth of success wreaking havoc on quarterbacks.

The 6-foot-6 defensive end went to Nebraska and became the Big 12’s D-lineman of the year in 2006, as well as a first team all-Big 12 selection as a senior.

He left Nebraska etched in the record books with the fifth-most tackles in program history (41) and sixth in sacks (20 1/2). That success translated to the NFL after he was drafted 13th overall in 2007 by the St. Louis Rams.

As a rookie, Carriker had 30 tackles and two sacks. The team named him rookie of the year. He played five total years in the league. After he was traded to the Redskins, Carriker signed a $20 million deal with the team, though a torn quad led him to the injured list and eventually he was cut.

In high school, he received all-state honors in shot put and long jump. He was also a three time all-Big 9 selection in baseball.

Notable stat: Won a World Series in 1957 with the Milwaukee Braves and three NBA titles with the Boston Celtics from 1959-1961. He is one of two people to win championships in two of the major American pro sports leagues.

Gene Conley is Benton County’s most decorated athlete and a two-sport phenom in rare company.

The Columbia High School (now Richland) grad was a four-time MLB all-star right-handed pitcher who played 11 seasons in the majors. He concurrently played six years of professional basketball over a 17-year stretch, and was a three-time NBA champion with the Boston Celtics from 1959-1961 alongside Bill Russell.

In 1959, the same year he won his first NBA title with the Celtics, he posted a career-best 3.08 ERA and 12-7 record with the Phillies. It was the same season he received his fourth all-star selection.

Notable stat: Played 182 consecutive games for the Steelers over 12 years.

The Kennewick product won a Rose Bowl at University of Washington under head coach Jim Owens in 1960 as a center and placekicker, then was drafted by the Philadelphia Eagles with the 18th overall pick in 1963.

He joined the Steelers in his second year as a defensive end and transitioned to center, where he snapped the ball to Terry Bradshaw. Mansfield was a fixture on the Steelers’ consecutive Super Bowl teams in 1974 and 1975, and was a second team All-Pro selection in 1972 and 1975.

Notable stat: Stop if you’ve heard this one before: standout college football player. And Olympic bobsledder.

Russ Weissenfels was a co-captain of Navy’s football team in 1989, where he led the team in tackles two years in a row. Weissenfield also had experience competing in the javelin, decathlon and as a sprinter, The Washington Post wrote in 1991.

After graduating from college, he was one of 33 athletes plucked to compete for eight spots on the U.S. Olympic bobsled team, and he qualified by a matter of hundredths of a second. He then competed in the four-man bobsled for the U.S. in the 1992 Winter Olympics.

A graduate of Hanford, he eventually returned to the football program as a position coach.

Travis Buck, Richland (baseball) – Played six years in MLB amid a 10-year pro career. Buck was Drafted by the Mariners out of Richland High School in 2002, but opted to go to Arizona State, where he became an all-Pac-10 outfielder and left the program with the eighth most hits all time. Helped lead Team USA to a gold medal at the 2004 World University Championships.

Darrel Keller, Kennewick (wrestling) – Won a Washington state wrestling championship at 123 pounds in 1966 his senior year at Kennewick, then proceeded to win a northwest and national JuCo national championship, then an NCAA Championship at Oklahoma State in 1970 at 124 pounds. He was on the U.S. Olympic team in 1972.

Kellen Moore, Prosser (football) – With a nearly 6-foot frame, Moore, a 2010 Heisman Trophy finalist, became the winningest quarterback in FBS history with 50 career wins. After going undrafted in 2012, Moore played six seasons in the NFL before being hired as the Cowboys’ offensive coordinator at age 30 in 2019. At Prosser, Moore was an All-American and Gatorade Player of the Year after setting state records for TD passes and completions.

Mike Reilly, Kennewick (football) – A multi-year standout at Kamiakin, Reilly bounced around four NFL practices squads before landing in the CFL, where he was named the grey cup MVP in 2015. He was the GNAC offensive player of the year at Central Washington in 2008.

Scot Pollard, Kamiakin (basketball) –  A Parade All-American in high school, Pollard, a lumbering 7-footer, spent his junior season at Kamiakin High School when he joined a star-studded team for a season. He moved back to San Diego after a year, then went onto star at Kansas, was the 19th overall NBA Draft pick in 1997 and played 10 seasons in the NBA, including spending his final season with the NBA Champion Boston Celtics.

Ray Stein, Richland (basketball) – A two-time all-state basketball player at Richland in 1963-64, the 5-11 Stein was an All-American as a senior, and went on to become a three-year starter and two-year captain at Washington State under coach Marc Harshman.

Russ Swan, Kennewick (baseball) – Left-handed pitcher played six seasons in MLB with three different teams, highlighted by a stint with the Mariners, where he went 6-2 with a 3.43 ERA in 63 appearances in 1991. Played at Spokane Community College and Texas A&M before signing with a pro organization.