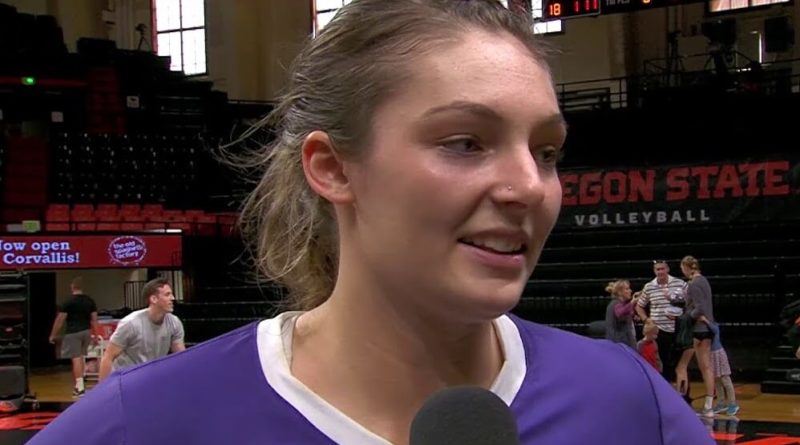 Notable Stats: Last season as a senior, Bajema set the UW’s single-season record for kills (597) and was No. 2 all-time in total points (676).

With three NCAA Division I sports-playing children, the Bajemas are as accomplished a sports family as there is in the state.

Kara Bajema might be the best of them all. She had college scholarship opportunities in all three sports.

Ultimately, she chose to play volleyball at Washington after leading the Lyncs to back-to-back 1A crowns in high school. And after moving to middle hitter early in her collegiate career, Bajema blossomed in her full-time move back to outside hitter the past two seasons.

Her 1,072 kills over the past two seasons ranks No. 2 behind Krista Vansant (1,076) in school history over a two-year stretch.

Last season, Bajema was the Pac-12 player of the year runner-up behind UCLA’s Mac May, posting one of the best single seasons in UW history, guiding the Huskies to second place in the conference – and to the NCAA quarterfinals.

Notable Stats: The most accomplished sprinter in Class 2A, Morrison set a WIAA record with 14 state event gold medals over her career (2009-12).

If you were locked in a sprint duel with this fast-twitching teenager a decade ago, chances are you were not winning the race.

Morrison’s high-school career alone makes her one of the county’s top athletes. She not only posted a four-peat in the 200 and 400 meters at the state meet, she left with both Star Track records in 2A (24.64 seconds in 200 still stands; 56.09 in the 400 was broken by Tumwater’s Brooke Feldmeier).

The only individual sprint she ever lost at a state meet was in 2011 (junior year) to River Ridge’s Necy Wade, who went on to run for the Washington Huskies.

One of the greatest runs of team success in national high school sports history belongs to Sehome, which captured an NFHS-record 13 consecutive state gymnastics championships (1973-85) – and Parker was the standout who helped trigger it.

She was poetry in the air, making graceful moves to capture nine individual titles, which now is No. 2 all-time in Washington behind Kentwood’s Liz Grajewski (11).

Parker won the all-around title in 1973 as a ninth grader – then won beam, floor and all-around in her final two seasons before heading off to Oregon State.

With the Beavers, Parker was the first gymnast to record a top-10 finish in an event at the NCAA championship, placing fourth in the floor exercise in 1979. She became the second All-American in school history (1978) behind Donna Southwick – and was the first OSU gymnast to be inducted into the university’s hall of fame.

Long before Hailey Van Lith was born, the small-school sensation that people from around the state flocked to see was this dynamic, athletic 6-foot-3 center from Deming in the 1980s.

Soares was a big deal – the 1986 Gatorade national player of the year who was headed to Texas, which at that time was the national powerhouse. She averaged 24.0 points and 13.0 rebounds per game as a senior, and scored 355 career points at the 1A tournament, which stood as a record for nearly two decades.

She started her final three seasons at Texas. And while the statistics don’t scream superstar (averaged 9.4 ppg, 5.8 rpg for her career), she was a big reason the Longhorns went to four consecutive Elite Eights in the NCAA Division I women’s tournament, including a Final Four in 1987 when their undefeated run ended in a loss to Louisiana Tech.

Soares had a brief professional career in Brazil where she met her husband, Ruiz Rogerieo Soares, and raised a family before briefly moving back to the area.