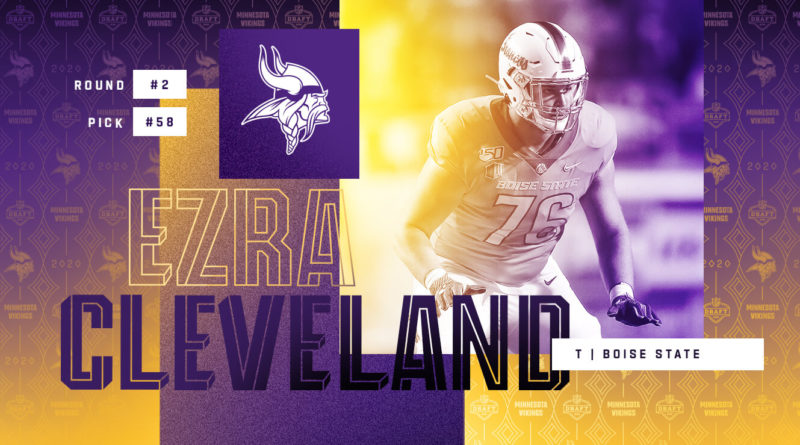 It might have taken a little longer than he anticipated Friday, but Boise State’s Ezra Cleveland, a Bethel High School product, finally found a home in the NFL.

One of the fastest-rising offensive tackle prospects over the past few months, Cleveland was selected in the second round (No. 58 overall) by the Minnesota Vikings.

The 6-foot-6, 311-pounder is the first player ever from Bethel drafted in the NFL. Former linebacker Caesar Rayford signed as an undrafted free agent in 2013.

Cleveland is the kind of bouncy, quick-footed athlete that can open holes for Dalvin Cook, one of the NFL’s top all-around running backs.

“Cleveland’s size and agility make him a natural fit for Minnesota, a zone-blocking team which requires top athleticism from its blockers,” NFL Draft analyst Rob Rang said. “He should be able to compete for immediate playing time.”

Right now, there is opportunity for Cleveland to go in and fight for a starting position as a rookie.

Left tackle Riley Reiff, whom the the team signed to a five-year, $58.75 free-agent deal back in 2017, is a candidate for a position switch inside to one of the guard positions.

And fellow second-rounder Brian O’Neill (2018) is the returning starter at right tackle.

Bethel coach Mark Iddins said he had a conversation with Cleveland in the past week about where both men thought he would end up.

They both agreed: The Vikings

“Out of the realistic possibilities … he wanted to go to Minnesota,” Iddins said. “He is going to a good team right away.”

Cleveland is the Vikings’ highest offensive-tackle draft pick since they selected USC’s Matt Kalil in 2012 – No. 4 overall.