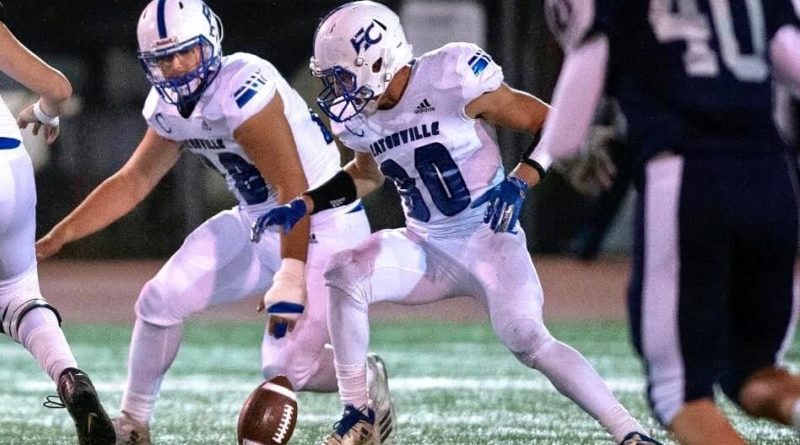 Move over, University of Oregon bright yellow and green.

There will be a new shades of colors coming to the Jumper household.

That is because Caden Jumper, the 6-foot-3, 245-pound do-everything standout for the Eatonville Cruisers, gave a verbal pledge to play football at the University of Washington – two days after he received the scholarship offer.

It is a wild contrast to what he has known his whole life. His father, Brandon – once the state of Washington’s all-time leading rusher at Eatonville (5,910 yards from 1984-87) – spent four seasons with the Ducks.

“I mean, he will always be a Ducks fan,” Caden Jumper said. “But he will wear purple.”

Especially after being part of the decision-making process.

After the UW offer came in, Jumper said he and his father had a sitdown chat to weigh the pros and cons. Both of them agreed – the way the Huskies use tight ends/H-backs in their offense, it was as close to a perfect fit as there was.

“From a versatility standpoint, he gives them that,” said Brandon Huffman, the national recruiting editor for 247Sports.com. “If he plays tight end, he would be an in-line blocker – kind of like a sixth lineman because he is a big, physical guy.

“He is a house. He is definitely a football player.”

Last season, Jumper put that on full display. He played everywhere – quarterback, running back and tight end on offense, and linebacker and defensive line on defense.

“That has taught me literally everything about football,” Jumper said. “I have done all these different positions, and it has made me so well-rounded to know how (football) is played.”

Jumper is the UW’s fourth commitment for the 2021 class, one that includes Kennedy Catholic quarterback Sam Huard.