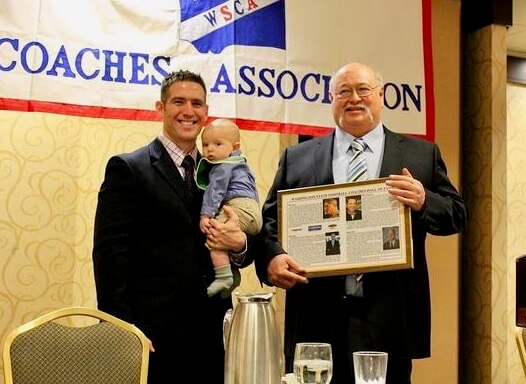 Patrick Ames had the model daily view of one of the storied coaching runs in Washington high school football.

He was the right-hand man – and offensive coordinator – for his hall-of-fame father, Bob, who gave more than four decades of his life guiding Meridian High School football.

It was the perfect life.

But after Bob decided to retire in February after 46 seasons, the next logical step was for Pat to continue the tradition.

Pat Ames, 43, was hired April 10 to be the successor to his father, who leaves as the state’s third-winningest coach all time with 332 victories – trailing Tumwater’s Sid Otton (394) and O’Dea’s Monte Kohler (347).

“It seems natural,” Ames said, “and it seems right.”

Ames played for his father, graduating from Meridian in 1994. And after playing college football at the University of Puget Sound, he returned to take a teaching job at the high school in 1999 – and join the coaching staff.

In 2004, Ames was promoted to become the Trojans’ offensive play-caller, and kept that role for the past 16 seasons.

“Somebody asked me if this has been my dream job,” Ames said. “To be a head coach is not. But to coach with my dad at Meridian has been – and I’ve wanted to continue with that as long as I could.”

And it will continue next season as the coaching titan will volunteer in some capacity on his son’s staff.

“As long as he feels motivated and healthy enough, why wouldn’t we continue to do this together?” Ames said.