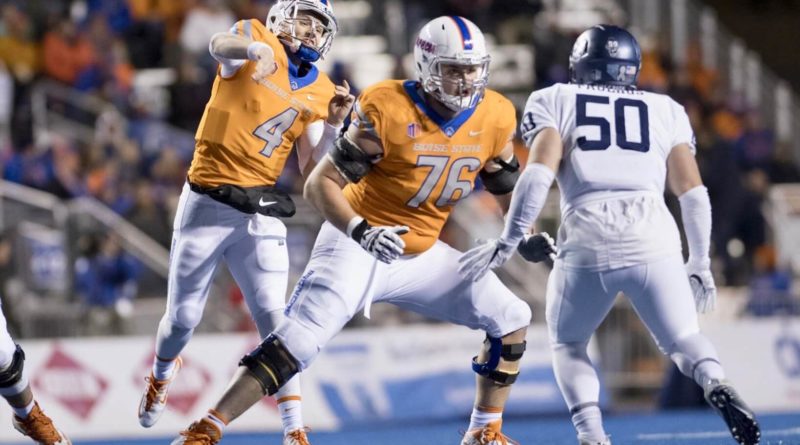 The (virtual) 2020 NFL Draft starts on Thursday and up to 10 former Washington high school stars are projected to be taken over the three-day, seven-round draft.

Longtime NFL Draft analyst Rob Rang offers a scouting report on each player and projects where they will potentially be selected during this weekend’s draft.

JACOB EASON
Quarterback, 6-6, 231, Lake Stevens High School
The skinny: Yes, Eason makes his share of poor decisions in the pocket, and had a pair of up-and-down stints at Georgia and Washington (3,132 passing yards, 23 TDs, eight INT last season). But, oh, that arm – it is easily the strongest in this class. And NFL scouts drool over his high-ceiling potential. “He’s still a raw commodity … but he has a chance to be a special starting (NFL) quarterback,” Rang said.
Best NFL position: Quarterback
Rang’s draft prediction: Late second round to early third round

SHANE LEMIEUX
Offensive lineman, 6-4, 310, West Valley of Yakima High School
The skinny: There is a great chance that every starting member of the Ducks’ offensive line last season will get a shot to play in the NFL. And this is the vocal leader of that group. “He’s the tough guy they’d turn to,” Rang said. The two-time All American made 52 consecutive starts, grading out as one of the top left guards in the country with his ability to move and overall length.
Best NFL position: Left guard
Rang’s draft prediction: Mid-third round

HUNTER BRYANT
Tight end, 6-2, 248, Eastside Catholic High School
The skinny: If you are thinking about drafting Bryant, it’s because he is a playmaker with the football in his hands (career 16.4 yard-per-catch average in three seasons at Washington). He combines superb body control and hand strength with a fiery competitive desire. “He is a seam threat, and can be a security blanket,” Rang said. So why this low? His straight-line speed is below average (4.74 seconds in 40) for his size.
Best NFL position: Pass-catching tight end/H-back
Rang’s draft prediction: Mid-fourth round

EVAN WEAVER
Linebacker, 6-2, 237, Gonzaga Prep High School
The skinny: Nobody in college football had more tackles the past two seasons that this record-setter from Cal (341, including school-best 182 last season). “He has Jedi-like instincts,” Rang said. “He can close his eyes and find the football.” But his 40 time was soft (4.76), and he doesn’t have the look of an elite athlete. Rang thinks that is the trap – and that Weaver will easily outplay his undervalued NFL draft status.
Best NFL position: Inside linebacker
Rang’s draft prediction: Late fourth round

TREY ADAMS
Offensive lineman, 6-8, 318, Wenatchee High School
The skinny: Two years ago, this mountain of a man at Washington was a sure-fire first-round pick. But after suffering serious knee and back injuries, he has not looked like the same player. “He just didn’t look healthy when he ran the 40 (in 5.6 seconds) at the (NFL) Combine,” Rang said. When healthy, Adams has the length, balance and agility to be a quality NFL offensive tackle – albeit one that relies more on finesse and technique than power.
Best NFL position: Left tackle
Rang’s draft prediction: Late fourth round

CALVIN THROCKMORTON
Offensive lineman, 6-5, 317, Newport of Bellevue High School
The skinny: Another one of those rugged Oregon linemen who liked grinding defenses in the run game. And Throckmorton finished his career making 52 consecutive starts at four different positions – 41 coming at right tackle. “He was kind of the renaissance man at Oregon who played everywhere,” Rang said. “His versatility is intriguing.” Not a great athlete, he often gets knocked off balance easier than what NFL scouts would like.
Best NFL position: Right guard
Rang’s draft prediction: Mid-sixth round

DAVID WOODWARD
Linebacker, 6-2, 230, Olympia High School
The skinny: This 2018 All-American at Utah State is one of the top coverage linebackers – and tacklers – in college football.. But Woodward saw his senior season end after seven games because of a knee injury. He did participate in the NFL Combine and Senior Bowl. “He did not ‘Wow’ you, but he did not disappoint, either,” Rang said. Could play outside or inside (would have to bulk up) in the NFL.
Best NFL position: Weakside outside linebacker
Rang’s draft prediction: Early seventh round

SALVON AHMED
Running back, 5-11, 197, Juanita High School
The skinny: Rang said this Washington playmaker was hurt more than most not having a pro day (canceled because of the COVID-19 outbreak). Why? It’s because Ahmed did what many undersized tailbacks do before the NFL Combine – bulk up. And his 40 time (4.62) suffered. Strong running back class might push value down, but he has real big-play juice (career 5.7-yard-per-carry average at UW).
Best NFL position: Third-down, change-of-pace back
Rang’s draft prediction: Mid-seventh round

JAKE LUTON
Quarterback, 6-6, 224, Marysville-Pilchuck High School
The skinny: He’s had a winding college career (started at Idaho, transferred to Ventura College, then to Oregon State) – finishing up with a solid senior season with the Beavers (2,714 yards, 28 TDs, three INTs). Though productive, Luton can be wildly inaccurate. But “the physical talent is there,” said Rang, especially enough arm strength to play in an NFL camp.
Best NFL position: Quarterback
Rang’s draft prediction: Late seventh round