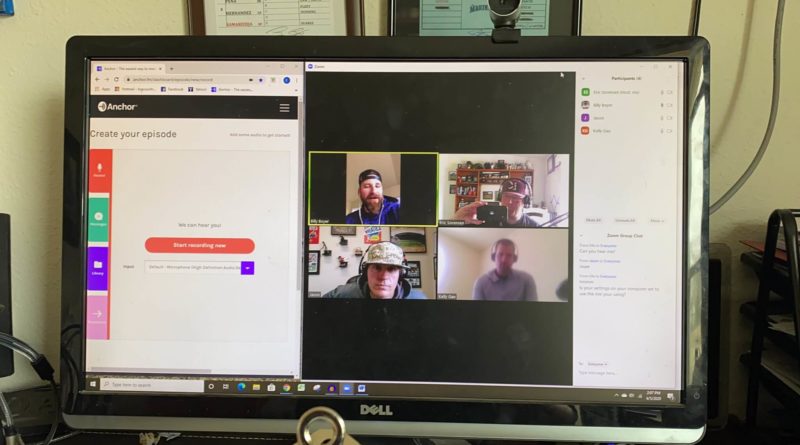 Archer’s description of his favorite fungo bat, a lightweight bat used by baseball coaches to repeatedly launch pop flys or ground balls, was as sincere as it was technical. It was a question only a baseball coach would ask another baseball coach.

“We’re wanting to understand a lot of how these coaches are running their programs and handling the COVID-19,” Jarrett said. “It’s a way to know coaches somewhat at a personal level. We felt like we could offer something to our coaches out there.”

It doesn’t hurt that they’re friends, either.

Gau, a Woodinville native, and Sorensen, a Kittitas native, played baseball together at Central Washington University. Both transferred in from community colleges and developed a friendship that has lasted well into their coaching careers. It has lived on most notably through a longstanding annual Apple Cup trip.

Sorensen, a 2006 Kittitas graduate, moved back to his hometown, got into farming, and ended up coaching his former high school’s baseball team. Gau became a manager for University of Washington’s baseball team after college, which propelled him on a coaching career in the college ranks. In 2018, he became interim coach at Saint Martin’s after head coach Ken Garland died, and was eventually hired as the permanent coach.

Jarrett, who has coached at Tri-Cities Prep for 10 years, got to know Sorensen when the 2B Eastern Washington Athletic Conference was created in 2016 and Kittitas and TCP became league opponents. They developed a bond that started with weekly calls each Monday trading scouting reports and observations on league opponents.

“Last year we started calling each other more intently, and we’ve become good friends through this thing,” Jarrett said.

Gau, Sorensen and Jarrett had talked about doing a baseball podcast together before the season started. Sorensen hosts and produces a podcast covering Kittitas Valley Sports, so he had the necessary equipment and a home studio that carries his nickname, “Big Country Studios.” But starting a podcast during the baseball season would have proved difficult.

So after it was delayed, then canceled, the three of them saw an opportunity.

“You take out practices, games, game preparation and that’s the bulk of your week right there,” Gau said.

In March, Jarrett called Sorensen and pressed him. It was time to make it happen.

On March 21, Sorensen published the pilot, a four minute introduction, and since then, the podcasts have come three times a week. Between their network of connections, they released interviews with high school coaches around the state such as East Valley (Yakima)’s Jesse Benedetti and accomplished college and professional coaches with ties to the Northwest. Billy Boyer, Minnesota Twins infield and base running coordinator, is featured in an April 5 episode and LSU hitting coach Eddie Smith was interviewed on the next episode.

Coaches who have Pacific Northwest ties make up a tight-knit network where there are not many degrees of separation between one another. With each guest, Sorensen loves to dive into what differentiates coaches from the Pacific Northwest.

The guests, they say, bring the podcast to life.

“Baseball coaches, I know that we’re all in the same boat,” Sorensen said. “We’re frustrated right now. Kinda lost and not knowing what to do.”

Since publishing the first episode, the coaches have been shocked at the response. A Twitter account created to promote the podcast quickly surpassed 150 followers and more than 100 listeners tune in each episode.

Sorensen hopes many of the listeners are just like him: coaches who want to hear the experience of their peers and don’t want to be complacent during the shutdown.

The bond between coaches comes across listening to the podcast. That much is evidence in the title, named after an item near and dear to every coach.

“There’s something about a fungo to a coach,” Sorensen said. “I got mine, I don’t let anybody touch it. As a coach I take care of it, it’s a part of me.”