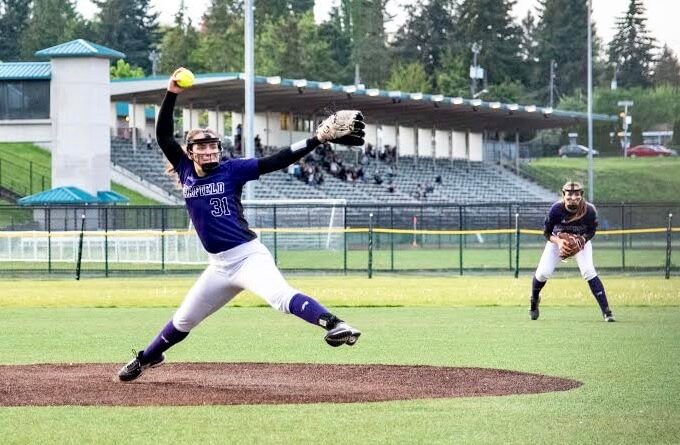 From Garfield’s Nicola Simpson to Stadium’s McKenna Braegelmann, many of Washington’s top high school softball players pitch out of the circle.

On the recommendation of coaches throughout the state, here are Scorebook Live’s top 15 pitchers in 2020.

She is all arms and legs – and still has a lethal enough rise ball-drop ball combination to fend off hitters (15-4, 1.42 ERA, 256K last year). In the spring, the 3A GSHL MVP and WWU signee had increased velocity (64 mph).

The state’s top underclassmen had a stellar debut season for the Bearcats (20-4, 2.15 ERA; 186K in 130 IP) – so good she was named the 2A Evergreen Conference pitcher of the year. She shows poise well beyond her years.

The ace of the 3A Greater Spokane League (8-5, 2.51 ERA, 108K in 106 IP) combines better-than-average velocity with helicopter-movement on her pitches – especially a deadly drop ball that induces weak ground balls..

Rarely can you survive solely on one pitch – but this all-3A Wesco ace has with her devastating rise ball, which piled up 245 strikeouts and four no-hitters. She has signed with Central Connecticut State.

A true workhorse, this two-time all-4A NPSL Cascade first-teamer (14-10, 2.32 ERA, 236K in 148 IP last year) has the strength, stamina and quirky motion to outlast any lineup. Signed with Bellevue College.

If there were any doubts that the 4A GSHL pitcher of the year could be a true ace, she settled all of those by pitching five consecutive games (3-2) on the final day of last year’s 4A tournament – and kept getting stronger.

Vintage Miller showed up in the 4A tournament – after struggling with up-and-down velocity much of the season. Make no mistake, her fearless attitude and versatile pitch array make her a bulldog in the circle.

She’s been a full-time pitching pistol for the Bombers her final three seasons, and the UNLV signee (21-1, 1.25 ERA) baffled hitters with a darting change-up to go with a heater, rise ball and curveball.

Who was the top pitcher in Spokane last season? It very well could have been the Tigers’ ace, the GSL most valuable player (10-8, 1.70 ERA, 206K in 126 IP) who carved up batters with a screwball among her five pitches.