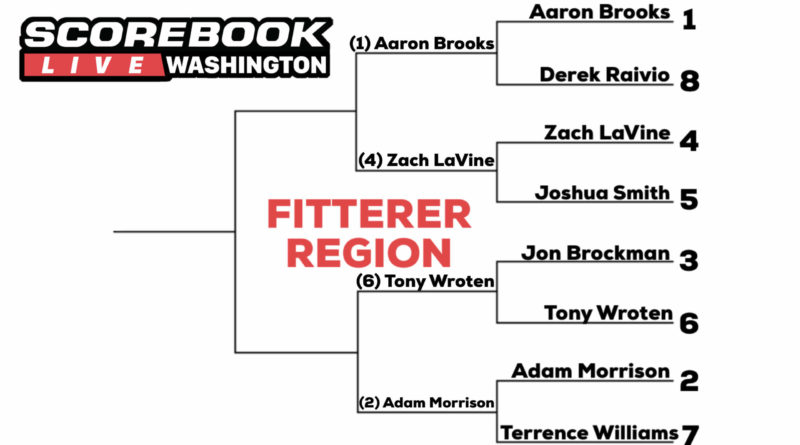 No. 4 seed Zach LaVine and No. 2 seed Adam Morrison won their Sweet 16 matchups Tuesday to advance to the Elite Eight of Scorebook Live’s bracket to determine the best Washington high school boys basketball player of the 21st century.

Voting for the Elite Eight matchups begins at 8 a.m. Wednesday. Here are the Sweet 16 results for the Fitterer Region:

Brooks, Franklin (2003)
“Possibly the quickest guard in the state since Jason Terry.  Won a state title at Franklin as a McDonald’s All-American before going to Oregon and then having very long NBA career.”

LaVine, Bothell (2013)
“Supreme athlete who could really shoot it – played at Bothell High School before heading to UCLA.  Left after one season and with his work ethic has carved out and incredible NBA career.”

Morrison, Mead (2003)
Led Mead High School in Spokane to a state title game appearance (37 points vs. Franklin) before losing to Aaron Brooks (38 points) and Franklin in 2003.  He became an instant contributor at Gonzaga and shared National Player of Year awards in 2006 with the Zags.  NBA career included 2 NBA titles with the Los Angeles Lakers.”

Wroten, Garfield (2011)
“An athletic and big left-handed guard who was always in attack mode.  Played one season at UW before leaving for the NBA.”