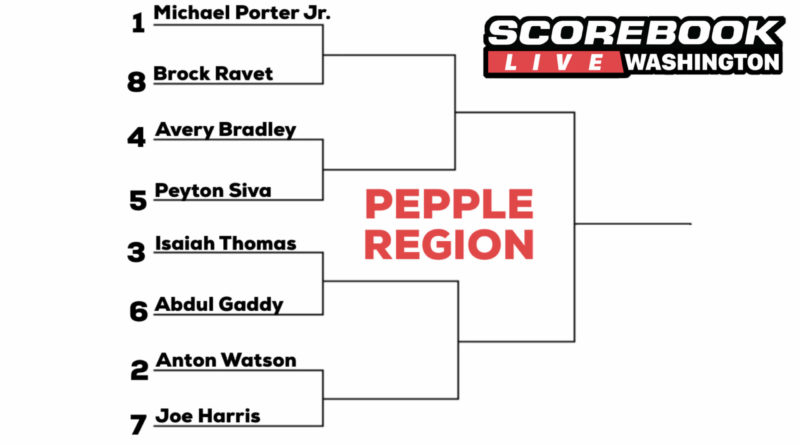 Scroll down to view the opening round results for the Pepple Region:

Ed Pepple is the state’s all-time winningest coach with 952 wins, most coming at Mercer Island, with four state titles.

Ravet (Kittitas, 2019)
“Three consecutive state B titles at Kititas while becoming the all-time leading scorer in the state before it was broken this past season. He started his college career at Gonzaga but left before playing a game. Will keep an eye out for where he lands next.”

Bradley (Bellarmine Prep, 2008*)
“A tremendous point guard from Tacoma’s Bellarmine Prep (who left the state after his junior year). Went on to Texas before embarking on a lengthy and successful career in the NBA.”

Siva (Franklin, 2009)
“As tough and quick as they come. Helped lead Franklin to a state title before heading to Louisville where he won a national title. Played in the NBA with the Detroit Pistons for a short stint but currently a star in the Euroloeague.”

Gaddy (Bellarmine Prep, 2009)
“Another Tremendous point guard for Bernie Salazar at Bellarmine Prep who would go on to have a solid career at UW. Currently playing for the OKC Thunder G League Affiliate”

Watson (Gonzaga Prep, 2019)
“All he did at Gonzaga Prep in Spokane is win. Back-to-back state 4A titles rounded out his high school career before heading to Gonzaga University.”

Harris (Chelan, 2010)
“The son of his coach at Chelan, Harris averaged 26.6 points and 8 rebounds his senior year, earning Mr. Basketball and Gatorade state player of the year honors. He is now one of the best shooters in the NBA.”