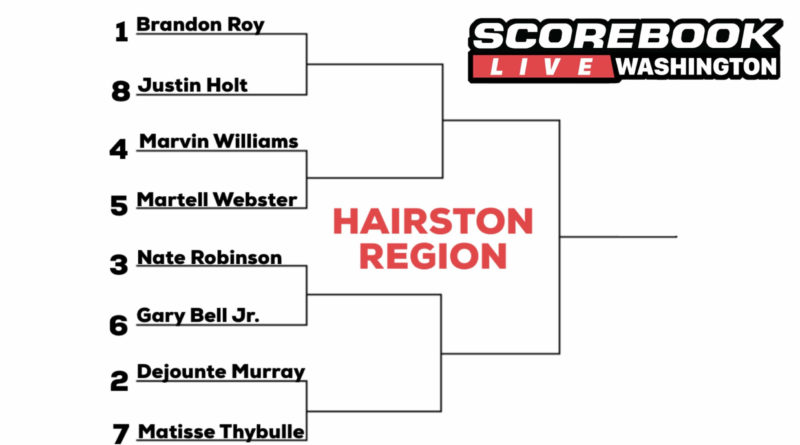 The first round of voting has wrapped up for Scorebook Live’s 32-player bracket to determine the best Washington High School boys basketball player over the past 20 years.

Scroll down to view the opening round results for the Hairston Region:

Regarded as the godfather of Seattle-based Metro League hoops, Al Hairston led Garfield to five 4A titles between 1980-1991.

Williams, Bremerton (2004)
“Versatile, do-it-all wing for Bremerton who went on to play at North Carolina where he was an instrumental part of NCAA Tournament teams.  Has carved out a long NBA career.”

Webster, Seattle Prep (2005)
“Originally committed to UW but went straight to the NBA from Seattle Prep when the rules still allowed.  Picture perfect jump-shot with athleticism to match made him a successful player who carved out a ten-year NBA career.”

Bell Jr., Kentridge (2011)
“Washington’s ‘Mr. Basketball’ in 2011 from Kentridge took this talents to Gonzaga where he was a four year starter.  After a short professional stint in Europe is now a graduate assistant coach at his alma mater.”

Murray, Rainier Beach (2015)
“Ultra-athletic and smooth but don’t overlook his skillset. Murray won three state titles and kept the Rainier Beach to UW pipeline going. He is now a tremendous player for the San Antonio Spurs.”

Thybulle, Eastside Catholic (2015)
“Maybe as good of a defender at the high school level while at Eastside Catholic anyone has ever seen in the state.  Became a key contributor to UW before being drafted in the 2019 NBA Draft by the Philadelphia 76ers.”