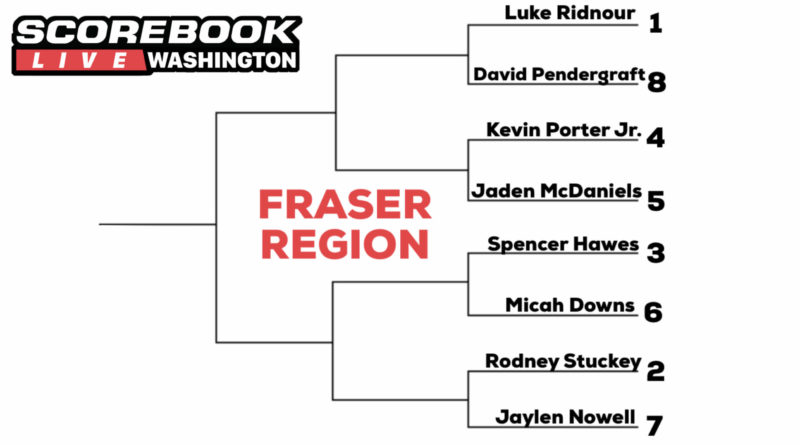 Scroll down to view the opening round results for the Fraser Region:

Mount Vernon’s Mac Fraser has the highest winning percentage (.824) among coaches with 400 or more wins.

Ridnour, Blaine (2000)
“Multiple state titles at Blaine, McDonald’s All-American, Elite 8 Run with the Oregon Ducks and a 12-year NBA career are just some of the accolades for this ball-handling wizard from up by the border.”

Pendergraft, Brewster (2004)
“His numbers in HS for the Brewster Bears were astronomical. He showed his true character and value in the game at Gonzaga where he became an instrumental part in deep NCAA Tourney runs.”

McDaniels, Federal Way (2019)
“A tall and lanky skilled wing who oozes potential.  Had an interesting freshman season at UW and will be faced with a decision of leaving early for the NBA or help get UW back to the NCAA Tourney in 2021.”

Hawes, Seattle Prep (2006)
“A skilled big if there ever was one in the state.  He was a stretch 5 before the skill set became popular.  The Seattle Prep product went to UW for one season before having a long NBA career.”

Downs, Juanita (2005)
“McDonald’s All-American at Juanita who started his college career at Kansas before transferring to Gonzaga.  Athletic and big wing with tremendous range.  Has played for some of the top European teams.”

Stuckey, Kentwood (2004)
“Had no holes in his game.  Tremendous offensively and got after it defensively.  Helped turn around Eastern Washington before heading to a long NBA career.”

Nowell, Garfield (2017)
“Won a state title for the Garfield Bulldogs before heading to UW for a short but successful stint including a Pac-12 Player of the Year award in 2019. Currently with the Minnesota Timberwolves.”