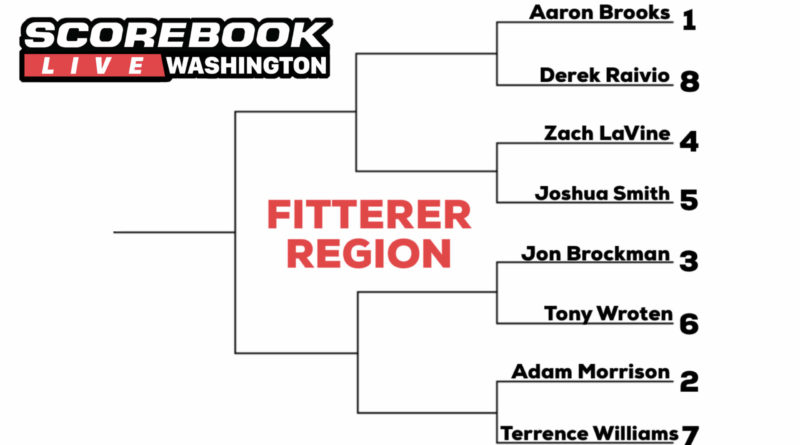 Scroll down to view the opening round results for the Pepple Region:

Brooks, Franklin (2003)
“Possibly the quickest guard in the state since Jason Terry.  Won a state title at Franklin as a McDonald’s All-American before going to Oregon and then having very long NBA career.”

Raivio, Mountain View (2003)
“Before partnering with Adam Morrison to form a tremendous backcourt at Gonzaga with deep NCAA Tournament runs, he was a scoring standout at Mountain View High School in Vancouver. Had as good of a handle and quick trigger as anyone in the bracket.”

LaVine, Bothell (2013)
“Supreme athlete who could really shoot it – played at Bothell High School before heading to UCLA.  Left after one season and with his work ethic has carved out and incredible NBA career.”

Smith, Kentwood (2010)
“Six-foot-ten big man and McDonald’s All-American – with ballerina footwork. Led Kentwood to the 4A title as a senior in 2010 (23.2 points, 15.0 rebounds a game). Went on to play in college at UCLA and Georgetown before finishing off his career with the Houston Rockets G-League affiliate, the Rio Grande Valley Vipers.”

Brockman, Snohomish (2005)
“Big man from Snohomish may have been the most terrifying assignment in the state for opposing bigs because of his size, strength and relentless effort.  Went to UW before a lengthy NBA career.”

Wroten, Garfield (2011)
“An athletic and big left-handed guard who was always in attack mode.  Played one season at UW before leaving for the NBA.”

Morrison, Mead (2003)
Led Mead High School in Spokane to a state title game appearance (37 points vs. Franklin) before losing to Aaron Brooks (38 points) and Franklin in 2003.  He became an instant contributor at Gonzaga and shared National Player of Year awards in 2006 with the Zags.  NBA career included 2 NBA titles with the Los Angeles Lakers.”

Williams, Rainier Beach (2005)
“Rainier Beach has had some high flyers, but none more explosive than Williams. The Vikings’ guard won a 3A title in 2003 before going on to play for Rick Pitino and Louisville – and then picked No. 11 overall in the 2009 NBA Draft.”