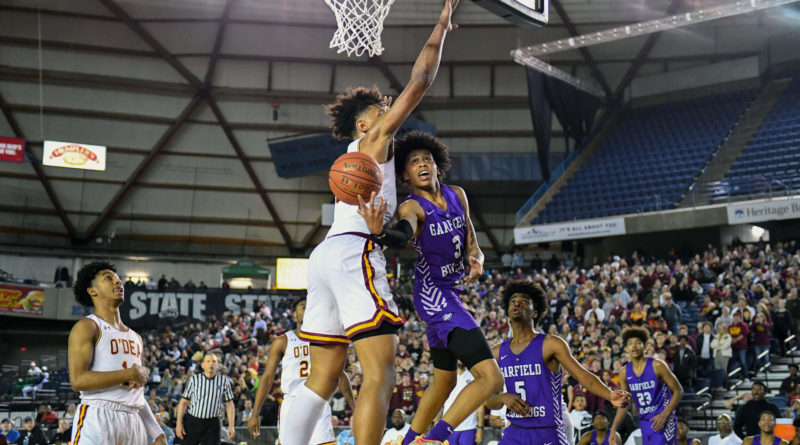 The 2019-2020 Washington high school basketball season came to a conclusion right before schools across the state shut down in response to the spread of coronavirus.

Before the season, Scorebook Live reporter Andy Buhler and analyst Dan Dickau identified 50 players to watch out for, in no particular order. After covering the state throughout the season, they consulted numerous coaches across all classifications and ranked the 50 most impactful players across the state during the 2019-20 season.

The list represents athletes who had the greatest impact — not necessarily potential beyond high school, nor recruiting prowess. Also, injuries were factored in. There are several very talented players whose body of work did not reflect a whole season, and were omitted due to injury and would otherwise be mentioned.

One of the country’s top 2021 recruits is a must-see talent. He averaged 23 points, 11 boards, four assists and two blocks per game on the season, as well as an abundance of highlights.

If a strong regular season didn’t do it, the Cincinnati signee separated himself with a tournament MVP postseason run (22.3 points, 15.7 rebounds per game), leading Garfield to its second 3A state title in three seasons.

Mullins may be the state’s best passer, and that’s just the beginning. The senior Saint Mary’s commit racked up 4A KingCo and state tournament MVP as he lead Mount Si to a 4A state title.

If his regular season numbers — 23.7 points, 15.3 rebounds, 3.3 blocks per game — weren’t enough, the Gonzaga commit separated himself even more as one of the state’s most dominant players, upping every category throughout the postseason as he carried Battle Ground to the Tacoma Dome.

A year after willing Mt. Spokane to the 3A finals, Degenhart took his game to another level. His 25.7 points per game led the Wildcats to a 3A GSL title and a return trip to the state tournament.

Hickman showed he can compete with anybody, and be relied on as a primary scorer. The junior point guard, whose Crusaders entered the tournament as the top-seeded team, upped his all-around shooting percentage by nearly 20 percent.

He re-tooled his body and elevated his game in a 1A tournament MVP performance that netted King’s a state championship. Linhardt proved he can score on all three levels, averaging more than 21 points and 12 rebounds in the SunDome.

Gonzaga Prep was going to fly as high as Lloyd took it, and the senior Grand Canyon commit willed the Bullpups to a state tournament with consistent offensive outbursts as the lone returning starter from a two-time defending 4A state champ.

Helped lead Olympia to a fourth place state finish, averaging 17 points, 11 rebounds and establishing himself among the state’s top centers.

Central Valley’s steady-handed point guard didn’t need the shine of scoring 20 points per game. His consistency as a disruptive on-ball defender and versatile floor general helped lead the Bears to the 4A state championship game.

The fiery combo guard established himself as one of the next guards to look out for out of Seattle. He led Garfield in scoring in the state semifinals, and his hot hand was pivotal in the Bulldogs’ 3A state title run.

A force down low, the Pepperdine commit was half of the state’s most imposing frontcourts.

The all-tournament selection and Northwest Nazarene signee can shoot from anywhere, score off the dribble, in the post and his 20.5 points, 9.2 rebounds and 2.5 assists per game helped lead Skyview to the 4A state quarters.

One of the state’s best perimeter defenders — a two-time 4A KingCo defensive player of the year — stepped up as a 3-point shooter (47 percent) and a scorer (16.5 points per game) in Mount Si’s 4A title run.

The versatile wing can affect the game in many ways, and he proved it this season, helping Eastside Catholic win the district tournament, enter the 3A state tournament as the top seed, as he proved his big shot-making ability along the way.

The 3A Pierce County League MVP and all-3A tournament selection could get to the rack against anybody, and captained a young Wilson squad to a fourth place state finish.

If he wasn’t already committed to Oregon State to play baseball, the dynamic point guard — who is already his school’s all-time career scorer — could have his pick of colleges to hoop at.

“Rainier Beach” and “Cinderella” in the same sentence sounds like an oxymoron, but behind Hart’s lead, the Vikings made a return trip to the 3A state semifinals as a 13-seed.

The point-forward grew a few inches, packed on muscle and rose to establish himself as a threat and a leader for a team that road an undefeated regular season into the 4A state semifinals.

Versatile floor general who can score, is perhaps the program’s best-ever passer, a disruptive defender and backed up his Mid-Columbia Conference MVP and defensive player of the year honors by hitting two clutch game-winners.

Versatile scorer with a quick release was the team’s leading scorer, and demanded the most attention from opposing coaches scheming to defend the highly talented Eagles.

Gifted scorer led Kamiakin (18.9 points per game) led a tall, athletic Kamiakin group to a district title and the 3A state tournament.

Posted video game numbers in a 2A CWAC MVP season and willed Selah to the 2A state tournament, where it lost in the first round.

Uber-athletic stretch forward led an Ingraham team down its top-two players into the postseason.

Remember this name. Stewart, son of former Rainier Beach great and USC standout Lodrick Stewart, had a solid freshman year and flashed some of his potential throughout Garfield’s dominant 3A state championship run.

Led Lindbergh in scoring with more than 17 points per game, averaged a double-double, flashes high-level athleticism and helped the Eagles to its best finish in eight years.

Cerebral point guard is hard to rattle and even tougher to stop. He led Seattle Academy to a state semifinal appearance and third place state finish.

The 3A Greater St. Helens League MVP was a walking double-double, can take defenders off the dribble and stepped up to lead Evergreen to the Tacoma Dome once all-league guard Jaden Stanley went down with a season-ending injury.

Was named 2A state tournament MVP after leading North Kitsap to a state championship.

Eastside Catholic’s enforcer is one of the country’s top football recruits, has a soft touch, smooth jumper and terrific footwork. Led the Crusaders against regional powers in the Les Schwab Invitational in December.

Sharp-shooting lefty was a mark of consistency for a Puyallup team that won a 4A South Puget Sound League regular season title.

One of the state’s top defensive point guards led Clarkston to a 2A state title appearance and runner-up finish.

First team all-league and 2A all-state selection led Toppenish to a league title and near-perfect regular season as a scorer, strong rebounding guard and a tenacious defender.

Multi-year starter and first team all-4A Wesco selection did a little bit of everything — including serving as an undersized big — amid Glacier Peak’s undefeated regular season and run to a fifth place state finish.

On a balanced team, Smith set the tone scoring the ball — especially in the 3A state playoffs — helping the Panthers make the 3A quarters, where they took O’Dea to overtime.

Big shot taker, and a big shot maker got it done on both ends of the floor to lead Mount Rainier into the postseason.

The proven scorer led Zillah to a league title, sharing league MVP honors and earning a first team all-state season despite the Leopards falling in a first round 1A state loser-out.

If there was a doubt who the kings of 2B would be, Gebbers removed it by scoring 34 points in the state championship game to nab all-tournament MVP honors, bring Brewster its ninth program title.

Led a 2B title contender that blew through much of its competition en route to a 2B state runner-up finish. Maulana is the total package, and one of the state’s most gifted point guards, regardless of classification.

The heart and soul of Federal Way played much of the season injured, and provided a steady hand running the offense, an outside shot and a natural defensive ability.

Became Washington’s new all-time leading scorer by averaging more than 30 points per game, and lead Odessa to a program-first 1B state title.

The South Sound Conference MVP was a consistent scorer for Central Kitsap, leading it to the 3A state tournament. White averaged around 20 points per game and effected the game in many ways.

Posted 20 points per game, was named co-Big 9 MVP and added in a career-high 44-point outing.

Delivered big performances amid a run to the 1A state championship game, where he capped a strong junior season with a game-high 28 points in an OT loss to King’s.

Cemented himself as the school’s all-time leading scorer to cap an illustrious four-year career, which ended in his third 1A state tournament appearance.

Listen: breaking down the Top 50