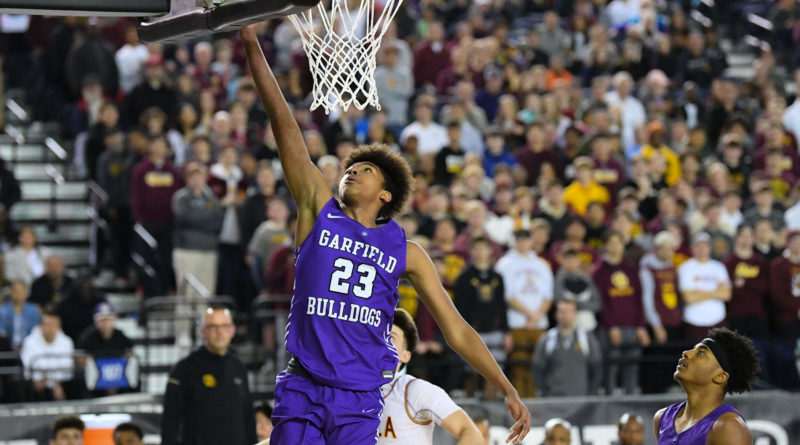 The Washington high school state basketball playoffs are over, which marks the end of the 2019-20 basketball season, and in the final installment of Scorebook Live’s weekly All-Classification Top-25, brought perhaps more movement than any week of the season.

After finishing third in the Metro League regular season, winning the Metro League tournament, then falling early in the SeaKing district tournament, the Bulldogs turned it on when it mattered most, blowing through top-ranked Eastside Catholic, a team it beat all three times this season, in the semifinals and Paolo Banchero and O’Dea in the 3A title, a 25-point win led by senior forward Tari Eason’s tournament MVP performance.

Champs at long last. The long, rangy and fundamentally sound Wildcats played their best basketball when it mattered most, en route to an authoritative 4A state championship run behind tournament MVP Jabe Mullins, Montana State commit Tyler Patterson and co.

The defending 3A champions finished state runners-up. The Fighting Irish beat Seattle Prep in overtime in the quarters, then took care of Rainier Beach in the state semifinals before being boat-raced by Garfield in the 3A title game.

The quest for the program’s first state title will have to wait another year. The Crusaders beat Wilson in the 3A state quarterfinals, then lost to eventual 3A champ Garfield (for the third time this year) in the semis. EC beat Rainier Beach in the third place game.

What a run by the Bears, which have a bevy of players who can beat you on any given night — Jayce Simmons, Noah Sanders, Gavin Gilstrap and Dylan Darling, to name a few —and what a coaching job by Mike Laws, who brought meshed an up-tempo offense with a suffocating defense that bounced top-ranked and previously undefeated Union in the 4A state semifinals before losing to Mount Si in the state title game.

Finished third in the 4A state tournament after taking down Olympia in the quarters, then dropping its game of the season in a semifinal loss to Central Valley before beating Glacier Peak in the third place game.

Finished fifth in state, but captured a win over red hot Sumner in the quarterfinals before being bounced by eventual 4A state champ Mount Si in the semifinals, then dropping the third place game to Union to finish with its best record in program history.

Beat Marysville-Getchell in the first round, 73-52, then lost to top-ranked Eastside Catholic in the 3A state quarterfinals.

One of the tournament’s most exciting stories. Beat Gonzaga Prep in a 4A state tournament first round thriller — its first state win in 49 years — before losing to 2-seed Glacier Peak in the quarterfinals, and eventually losing in a fourth place game to Olympia to finish sixth overall.

Bounced in the first round of the 3A state tournament by hot-shooting Seattle Prep after an eye-popping performance against top-ranked Eastside Catholic in the regional round. Junior forward Tyson Degenhart made the all-tournament second team despite playing in just one game.

Finished sixth in the 4A state tournament after being bounced by Mount Si in the quarterfinals.

The Bullpups got the final look they wanted, but the shot didn’t bounce their way in a thrilling first round loss to tournament darling Sumner, which halted a torrid stretch of play by senior Liam Lloyd and Gonzaga Prep.

Beat 5-seed Evergreen (Vancouver) in the first round, then lost to Rainier Beach in the quarterfinals.

Put forth a strong showing in the 3A state tournament, knocking out Mt. Spokane in the first round before taking O’Dea to overtime in a quarterfinal loss.

Well, the 1A state champ is a 14-seed. Rick Skeen has demonstrated he’s not afraid of a tough schedule, and won’t play the RPI game, even it it means facing a 1A state tournament gauntlet. The Knights cleared the toughest of hurdles — Zillah, King’s Way, Seattle Academy — before taking down Lynden Christian in OT in the 1A state title game behind an all-tournament MVP performance from sophomore Tyler Linhardt.

Beat Auburn in the first round of the 4A state tournament, before losing to top-seeded Union in the quarterfinals. Finished fourth in state after beating Sumner in the fourth place game.

Was bounced in 4A District 8 tournament, but as we wrote last week, don’t let this fool you: Chiawana is a state tournament-caliber team, and could have reasonably performed in the Tacoma Dome if it would have made it out of a cutthroat district that is only allocated two berths.

Lost to North Kitsap in the 2A state semifinals after beating Toppenish in the quarters. Finished third in state after beating Lindbergh, 72-58, in the third place game.

Beat Central Kitsap in the first round of the 3A state tournament, then lost to eventual 3A state champion Garfield in the quarterfinals, then to Wilson in a fourth place playoff.

Lost to Olympia in the first round of the 4A state tournament, 53-49.

Finished fourth in state after an improbable run to the 3A semifinals that went through Evergreen and Kamiakin — two league champions — along the way.

Defeated Meridian and La Salle to reach the 1A finals, where the Lyncs lost to King’s in an overtime thriller.

Lost to Rainier Beach in the first round of the 3A state tournament.

Lost to 14-seed King’s in the first round of the 1A state tournament. King’s went on to win the championship.

Beat King’s Way Christian in the quarterfinals, 64-51, then lost to eventual state champion King’s in the semis, 68-66, before beating La Salle in the third place game.