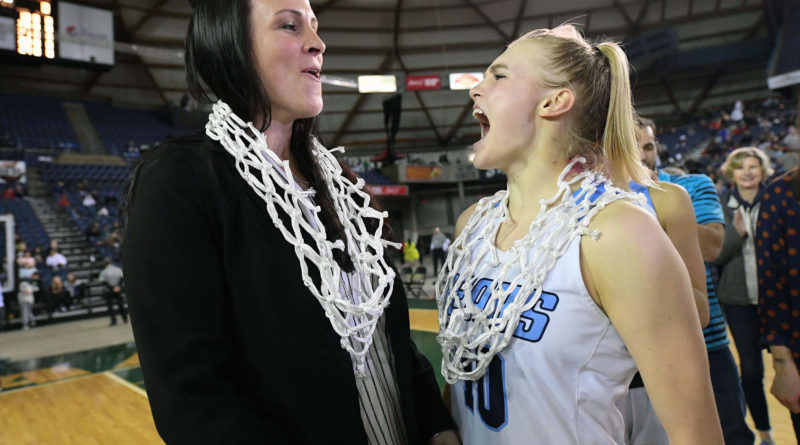 Team of destiny won 23 of its final 24 games, including 4A title, with defense, determination

Remarkable season ended with 4A title-game disappointment. Falcons and Mia Hughes will be back

Went 1-2 at the state tournament, but everyone returns – and Crusaders will be 3A favorites in 2020-21

With their ability to defend and shoot the 3-pointer, Lions really ended up being class of 2A

1A title-game loss to Lynden Christian was crushing blow, but nobody will soon forget Hailey Van Lith

Beats Eastside Catholic for third place, and like the Crusaders, brings all key pieces back next season

Again, Grizzles will be just fine with Aaliyah Collins, Maya Erling back next season as seniors

Whatever the Kangs do moving forward with PG Rosa Smith, PF Sydney Hani won’t be a surprise

Class of the West Central District, SG Aaliyah Alexander had a fantastic senior season for her dad

CBBN winner might slip some next year, but Chiefs will have Anna Olson, Meagan Karstetter in fold

Learned valuable lessons in state loss to experienced Lynden. Bulldogs will be back, for sure

Alivia Stephens-led Eagles were distinctly good early and late, which is a good time to play well

This still should be one of the more intriguing 4A teams around next year, led by Talia Von Oelhoffen

Scots will graduate their top guards, but 3A Wesco winners have post player to build around (Kiano Lino)

Will still be big factors in the Metro League, especially with Tamia Stricklin, Molly Moffitt back as seniors

Lions were a fun group, especially all the length-of-floor feeds from Julia Bordeaux to Callie Stevens

Raigan Barrett will now get to focus on softball, but still will be remembered as a cagey, scary scorer

2B champions, baby! And with their overall length, led by Maisie Burnham, could have done well elsewhere

Kind of the what-could-have-been group losing star Jordyn Jenkins. Still made it to the Dome. Impressive

Around Christmas, the Abes were a mess. They figured it out to win WCD title, reach state tournament