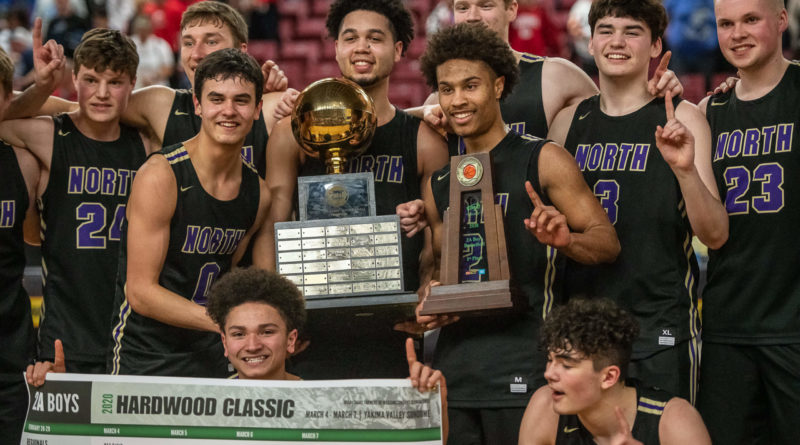 YAKIMA – It took a long time for the North Kitsap Vikings to reach a 2A state boys basketball championship game.

And they didn’t want to waste that chance Saturday afternoon.

Tournament most valuable player Shaa Humphrey hit a crucial basket in the lane with 33 seconds to go, and the Vikings survived a game-tying miss by Clarkston at the buzzer to post a 56-53 victory in the SunDome.

Jonas La Tour led North Kitsap with 21 points. Kobe McMillian added 17, and Humphrey had 11. Tru Allen, of the Bantams, led all scorers with 26 points – 18 coming in the second half.

The Vikings completed the rare achievement at a state tournament – winning four games to clinch the crown.

“The fact we came back from losing our regional game, and coming here for four games in a row to win the title, that just makes me so happy,” La Tour said.

What the Vikings needed was to face a second-half deficit for a third consecutive state-tournament game.

After Allen’s 3-pointer gave Clarkston its final lead, 49-47, with 4:37 to go, McMillian tallied his team’s next 10 points, including 7-for-7 from the free throw line.

And Humphrey’s turnaround floater in the lane gave the Vikings a 56-51 lead with 33 seconds remaining.

But Allen responded with a 3-pointer, and the Bantams got a late turnover to get one final look. But Alex Italia’s game-tying attempt from the right corner fell off at the buzzer.

Combined with La Tour’s early scoring, and the contributions of McMillian and Humphrey over the final five minutes, the Vikings found a way to outlast Allen and the Bantams.

McMillian was quiet for most of the game, but started his run of 10 consecutive points with a 3-pointer to give North Kitsap a brief 47-46 lead. And he barely sniffed the rim on all seven made free throws.

But when the Vikings needed the biggest bucket of the season, they went to Humphrey, who cashed in on his short jumper in the lane.

Every time it seemed like the Vikings hit a lull, La Tour came up with a big shot (usually a 3-pointer). He had 21 points on 8-for-16 shooting, including four 3s.

You just have to ride the Allen train, which usually means a lot of tumbles into the lane. He was hard to handle, especially in the second half (18 of game-high 26 points).

“I can’t think of a better way to end this thing.” – North Kitsap coach Scott Orness