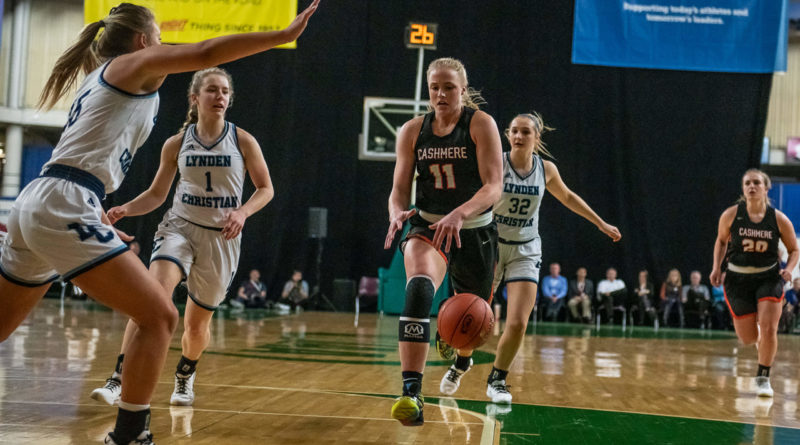 YAKIMA – In the end, the collective effort of second-ranked Lynden Christian was too much for star point guard Hailey Van Lith and the No. 1 Cashmere Bulldogs.

In a five-minute span, the Lyncs turned a potential Van Lith coronation into their own Class 1A state title celebration, overcoming a large deficit to sun the Bulldogs, 58-55, in an intense, back-and-forth thriller at the SunDome.

Lynden Christian went on a 13-0 run to wipe out a 53-45 deficit early in the fourth quarter.

This was no fluke – and should never have been seen as such since Lynden Christian had won two of the past four 1A titles heading into the championship showdown Saturday.

And every time Van Lith flashed her brilliance – on Saturday, she rediscovered her 3-point shooting form, making six of them and finishing with 27 points – the Lyncs had a big answer.

“We didn’t lose this game,” Cashmere girls coach Brent Darnell said. “We got beat. They are that good.”

Van Lith scored 16 of her 27 points in a wild third quarter, including back-to-back deep 3-pointers in the final 38 seconds. The last one from a good 25 feet out, sent the packed house into a frenzy.

That would be the last bucket of her career.

Van Lith tried to cut into the deficit, but missed a shot in the lane with 9.5 seconds to go, and Cashmere trailing 58-55.

After Paige TeVelde missed the front end of a one-and-one free throw for the Lyncs, Cashmere had one final chance to tie. But the Bulldogs’ outlet pass to Van Lith was intercepted by Riley Roetcisoender in backcourt, and she was immediately fouled with less than a second remaining.

Like her Cashmere teammates, Van Lith – who put so much into trying to reel in that elusive title – was heartbroken afterward, letting the tears flow along her cheek.

Under her watch, the Bulldogs advanced to three 1A championship games. Each time, they came up short.

“I feel horribly for her. I feel like I let her down, you know,” Darnell said. “I just hope that doesn’t tarnish her legacy as one of the greatest, if not the greatest (player) to ever to come out of Washington.”

Lynden Christian’s overall depth, talent and poise. Stump led the team with just 12 points, which meant the Lyncs came out attacking from all angles.

“We ran all nine of our girls out there … and with our offense, we wanted to cut hard and make them move as much as we could,” Bomber said. “We hoped by the end of the fourth quarter we’d have a chance, and have a little more gas in the tank.”

It was apparent that in the final five minutes, Van Lith lost some steam. And the Bulldogs, for the first time all game, were a little hesitant on how to proceed with a sizable lead.

“We’ve been in many games like that, and I felt (they) prepared us for this moment,” Lynden Christian’s Riley Dykstra said.

The nod seriously could have gone to a number of contributors, but Dykstra is the leader of this group – and was big all night (10 points, five rebounds, two assists, one blocked shot).

She was phenomenal for much of the game with 27 points, 12 rebounds and six 3-pointers, providing more than a few shake-the-house moments.

“We took the challenge and got it done.” – Lynden Christian guard Riley Dykstra