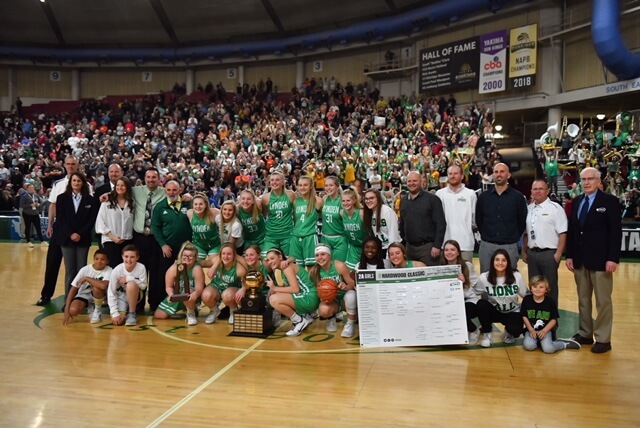 YAKIMA – Rob Adams is sure happy he has the “Three Stooges” on his Lynden High School girls basketball team.

It’s because seniors Keylie Hershey, Ruby Vander Haak and Liv Tjoelker know how to play off one another.

Led by Hershey’s frantic start to the second half, the top-ranked Lions captured their third state championship in school history with a 60-38 victory over upstart West Valley of Spokane on Saturday night in the SunDome.

Hershey tallied 13 of her game-high 22 points in the third quarter, including the first 10 in a row that triggered a runaway scoring spurt.

It started with a steal and layup just 11 seconds into the second half, and she buried back-to-back 3-pointers to hand Lynden a 28-15 lead.

“It got us rolling,” Hershey said.

Lynden made four 3-pointers in its 20-point third quarter as the Lions built as large as a 24-point lead.

Tjoelker added 15 points, and Vander Haak – the tournament most valuable player – had 12 points. Both hit a pair of 3-pointers.

All three were ninth graders on Lynden’s 2017 state championship squad.

“This year, we were out for blood,” Hershey said.

Hershey played like it in the third quarter. Adams said, “pound for pound, she’s the best basketball player I have ever had.”

The three Lynden seniors. Each of them had big moment in the Lions’ three state-tournament games. On Saturday, Hershey was the one who stole the show with her big third quarter (13 points).

She scored 10 consecutive points in a span of 3:17 to start the third quarter as Lynden built a 30-18 lead.

“She is dynamic,” Adams said.

The do-everything point guard acted like a senior playing in her final game. She was energetic on both ends, and had a game-high 22 points and three steals.

A night after she sank the buzzer-beating 3-pointer to beat Tumwater, the SPU signee attacked the basket at will, piling up 15 points, three assists and two steals.

“We were super high-intensity on defense, but we couldn’t really find our flow on offense (in the first half). I decided to jump the pass … and that got the ball rolling.” – Lynden guard Keylie Hershey