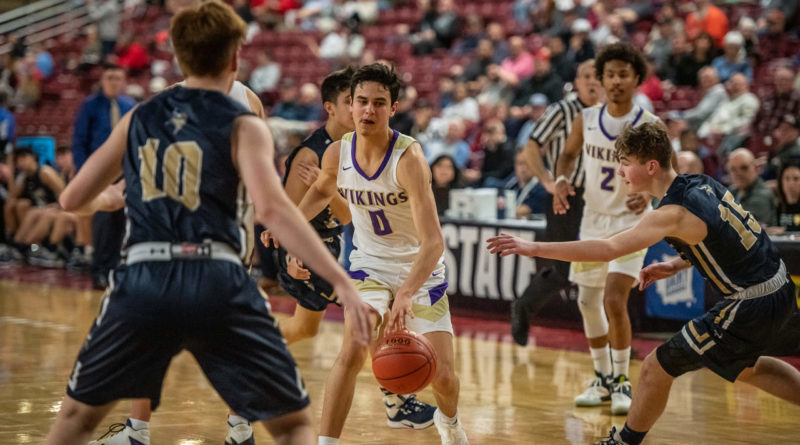 But North Kitsap High School boys coach Scott Orness was quick to identify it at an early age.

His talented sophomores – Jonas La Tour; Aiden and Johny Olmstead; and Trent Williams (along with Bobby Siebers, who played last season with the Vikings before transferring to Glacier Peak) – are a big reason why the school was playing for its first state championship Saturday afternoon in the SunDome.

When Orness took the job at North Kitsap in 2015, one of the understandings was that the parent group would help found a local basketball club – which happened with Drive Basketball.

“They were having pretty instant success at AAU tournaments,” Orness said.

All of them play the same positions in high school that they did on their youth team: La Tour was a wing player who could shoot it. Aiden was a combo guard who did the little things to win games; and Williams also played guard.

Johny Olmsted has always been a point guard, but scored more back then than he does now.

“Johny is a good shooter, not a great shooter. But he is good at finding the great shooter,” Orness said. “I can’t afford to have him out of the game. … He is our middle guy, our engine.”

Has Orness ever dealt with a group like this, as a player or coach? He said this set of 10th graders do remind him of the Bainbridge High School sophomore group he has back in 2006 with Coby Gibler, Caleb Davis, Austin Wood and Nick Fling (and later Steven Gray, who transferred from Chimacum).

“It’s their toughness and grit,” Orness said. “I don’t know if I can think of a team I’ve coached, or I know of one that was down 14 (points) in the fourth quarter to the two-time defending state champions and come back and win (like North Kitsap did Friday against Lynden).

“To watch those guys do what they did last night was remarkable.”

After the game, the Thunderbirds went directly to a team dinner.

“It was quiet for a while,” Johnson said.

Athletic director Tim Graham spoke for a few minutes about the history of Tumwater girls basketball, and that a shot at third place would be one of its highest finishes ever.

W.F. West has the top sophomore recruit in the state right now in 6-foot-2 wing player Drea Brumfield, who is already receiving plenty of NCAA Division I interest.

Brumfield will play for the top Tree of Hope U-17 Nike EYBL squad starting this spring that has produced the likes of Cashmere’s Hailey Van Lith, Garfield’s Dalayah Daniels, Kentridge’s Jordyn Jenkins and Beamer’s Aaliyah Alexander in the past couple of seasons.

It will kick off in late April at the Boo Williams Nike tournament in Virginia, followed by a mid-May Nike EYBL event in Oregon. And the two big July tournaments are in the Midwest – the Nike USJN in Indianapolis and Nike Nationals EYBL in Chicago.

“Every tournament I’m going to play in is important,” Brumfield said. “I’m especially excited because playing on this (Tree of Hope) team will open up a lot of doors for me, and give me some new and great opportunities.”

Gene Rostvold, who brought the state tournament to the SunDome, completes his 22-year run as the tournament manager Saturday.